What Is Tennis Elbow? 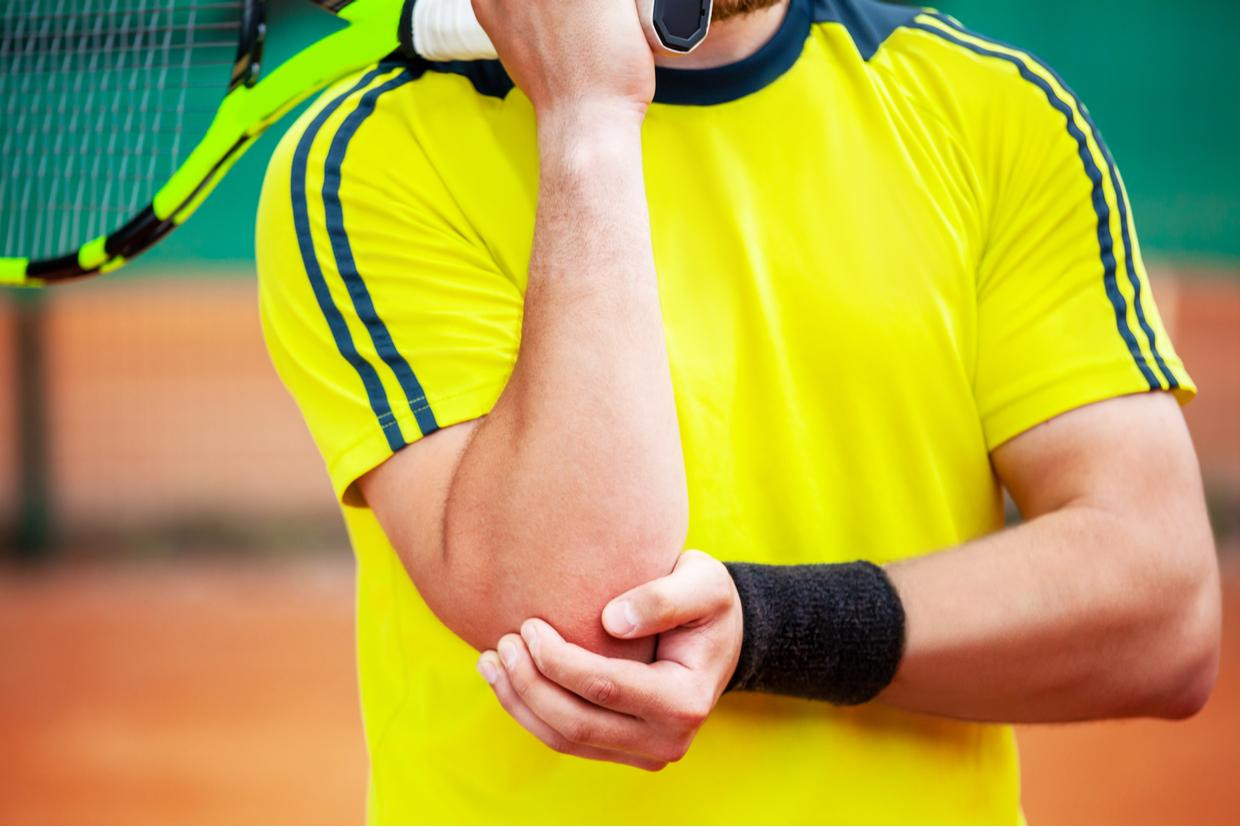 Tennis elbow is a painful and sometimes debilitating condition caused by overuse and the high forces experienced by the extensor muscles of the forearm when striking a ball. This accumulated stress results in the breakdown of the collagen located in the tendons of those extensor muscles where they attach to bone.  The outcome is often localized elbow pain and loss of grip strength. Due to the nature and location of injury it is very slow healing.

Once the tendon breakdown occurs, the damage is medically classified as a form of tendinosis, rather than tendonitis since there is rarely inflammation at the site of injury. Technically, because most “tennis elbow” pain is focused on the outside, or lateral side, of the racket arm, the condition is identified as lateral epicondyle tendinosis. Lateral for its location on the outside of the elbow, epicondyle which identifies the attachment site of tendon to bone, and tendinosis referring to the type and location of the injury to the muscle tendon. The muscle most likely to be damaged in someone who experiences lateral tennis elbow is the extensor carpi radialis brevis (ECRB). So “tennis elbow” is damage to the tendon near where the ECRB attaches to the bone on the outside of the racket arm elbow.

Now that we know what causes tennis elbow, where its located and its formal medical name, what can we do to get rid of it?! As with any type of injury the best remedy is to avoid it in the first place but failing that, rest and proper stretching are the best passive methods of reducing the pain and encouraging healing. This can be a slow process requiring significant changes in activity for weeks or months depending on the severity of the injury and the age of injured person. But what happens when a player can’t (or won’t) stop playing and/or practicing? Do they need to rely on pain medication or even consider surgery to fix the problem? Not necessarily, there are a wide variety of elbow braces on the market that claim they will immediately reduce pain while maintaining function for their wearers. However, while some users of these braces report that they are effective at reducing elbow pain and allow them to continue to play, many others report little or no success in the braces alleviating their tennis elbow symptoms. Why do the results of wearing elbow braces vary so from person to person? It may come from the physical differences of one player compared to another and how those physical differences affect how tennis elbow braces perform for the individual.

To understand why braces may work for one person and not another you must understand how two sets of sensory organs found in skeletal muscle like the ECRB function. They are muscle spindles (MS) and golgi tendon organs (GTO). Muscle spindles are found within the muscle belly and sense when a muscle is being stretched to (or past) its physical limits (Prochazka, A. (1980). If the muscle spindle determines that the muscle is in danger of being stretched to the point of damage, it causes an involuntary contraction of the muscle, a “last gasp” effort, to keep it from being stretched to the breaking point. Golgi tendon organs are found in the tendons of muscle near where they attach to bone. The GTO sense excessive pulling stress in the tendon and send a message to the muscle to stop contacting before damage occurs to the tendon (Moore, J.C., 1984).

Under most normal situations the muscle spindles and GTOs do exactly what the ECRB muscle needs to keep it safe and healthy. However, hitting a tennis ball is not a normal experience for the muscles of the forearm, especially the extensor muscles that are active when hitting a backhand. At ball impact the wrist is forced into flexion (the palm of the hand is forced toward the forearm) severely stretching the extensor muscles which are trying to pull the wrist in the opposite direction. The forearm extensor muscles are already active assisting with gripping the racket, stabilizing and pulling the back of the hand toward the forearm, while pulling on a possibly previously damaged ECRB tendon in the elbow. When a ball is struck the wrist is momentarily forced into flexion activating the muscle spindles resulting in additional muscle contraction even as the GTO are trying to stop the muscle from contracting. Such mixed signals may further damage an already weakened ECRB tendon. The outcome of this internal struggle, is likely to cause the player’s “tennis elbow” to worsen.

Research conducted as part of my dissertation I think indicates why tennis elbow braces work for some people but not others. It all has to do with vibrational energy transmitted through the forearm as the result of hitting a backhand.

It has been known for many years that muscle spindles can be tricked into firing when vibrations occurring at specific frequencies are transmitted through muscle (Burke, D., Hagbarth, K.E., Löfstedt, L, Wallin, B.G. (1976). Those vibrational frequencies that trick and activate the muscle spindles often occur when a player strikes a ball with their racket. That means that not only 1) is a damaged ECRB tendon stressed as the active muscle pulls on it, 2) it is additionally stretched when hitting a backhand because of the forced wrist flexion, and finally 3) it is again stressed by the extra muscle contraction caused when the muscle spindles are involuntarily by vibrations transmitted through the forearm as the result of hitting the ball with a racket! That’s three strikes and you’re out when it comes to tennis elbow damage and pain.

So how can tennis elbow braces stop this damaging “tug of war” between the muscle spindles and golgi tendon organs for some people? Well it seems that certain braces match an individual’s racket arm anatomy in such a way that the addition of the brace along with the mass of the racket arm, appears to cancel out the vibrational frequencies that trick the muscle spindles to activate. While that doesn’t remove all the factors contributing to tennis elbow, it does eliminate that extra tug generated by the involuntary contraction caused by the muscle spindles. Eliminating that additional pull on the tendon can result in reducing damage and speeding recovery from tennis elbow.

Unfortunately, off the shelf tennis elbow braces are not currently optimized to act as vibrational dampeners, but it is possible to create such braces. My hope is that in the future this new understanding of the internal mechanics of tennis elbow can be utilized to create personalized elbow braces that can serve as both prevent and reduce the suffering associated with tennis elbow.

Jeff Bauer Dr. Jeff Bauer has been a professor of Biomechanics over 25 years. He is also a former Division I tennis player and spent almost a decade working as a Aerospace Systems analyst.
Share This Story, Choose Your Platform!