How High Is Their Sky?

Measuring how high a young athlete jumps has become a coaching tool that adds fuel to the age-old Venus and Mars gender and power discussion that a pride of research lions has brought to the weightlifting world.

Represented by Clemson, West Virginia, East Tennessee State and Charles Darwin Universities published the downloadable Performance Comparisons of Youth Weightlifters as a Function of Age Group and Sex in The Journal of Functional Morphology and Kinesiology.

Though it comes as no surprise to most, the Venus/Mars-Androgen/Estrogen gap becomes distinct and measurable in one of the study’s graphics that shows young boys' and girls' jumping abilities are similar until puberty powers the boys higher. 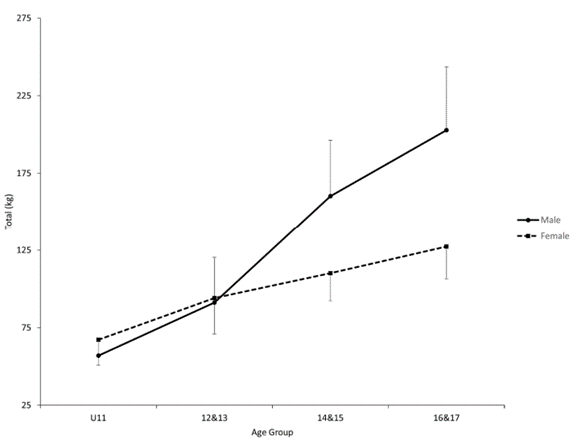 They say the knowledge the study presents can help coaches anticipate changes in young weightlifters' performance to aid in developing a competition plan.

They go on to assert that vertical jump height is not only a practical and reliable tool to evaluate performance potential, but it is also easy to do.

As they continue, “the available evidence indicates that some of the factors that also lead to a higher-caliber weightlifter, such as maximum strength, are likely those that lead to a better jumper.  For example, maximum strength is often thought to limit one’s force production capacity in a dynamic explosive movement, consequently limiting displacement of an object (e.g., body mass and/or barbell)”.

In the study, data from 130 youth athletes 65 boys and an equal number of girls were used to examine the progression of performance and the relationship between countermovement jump height (CMJH) and weightlifting’s Sinclair total while considering interactions between CMJH and age and/or sex.

The study began with two goals:

This leads SETV editors to conclude weightlifting's next superstar may be up, up and a weigh!        Sorry.  :-)

SETV Editors’ Choice Editors’ Choice blogs are selected reviews of articles and studies of interest to athletes, coaches, and parents. Reference links are included when available.
Share This Story, Choose Your Platform!