In 2010, Derrick invented a product called DC Blocks. DC Blocks is a product made in the U.S.A. from recycled plastics and used by many professional sports teams, universities, fitness and medical facilities to develop their athletes’ power. The products are stackable, lightweight, and durable and are used in all phases of training, rehabilitation, and performance development.

Although I have an extensive background in Olympic-style weightlifting, I am not a guy who believes that these movements are the ‘be all’ and ‘end all’ for everyone. For those athletes not destined to become weightlifters, our lifts are tools to increase the power you can apply on the field or court.

As I wrote in the previous Learn to Clean blog, we’ll continue with the top-down method to teach the power snatch. We’ll start from the high blocks.

The importance of learning the snatch "power position" is that everyone can do exercises from here: the beginner, those lacking skills for the full snatch, the injured, or the experienced athlete. The barbell in this position is closer to the athlete's Center of Gravity (COG) than in the clean, so lifting from the snatch power position can be safer and more functional than from the clean power position. 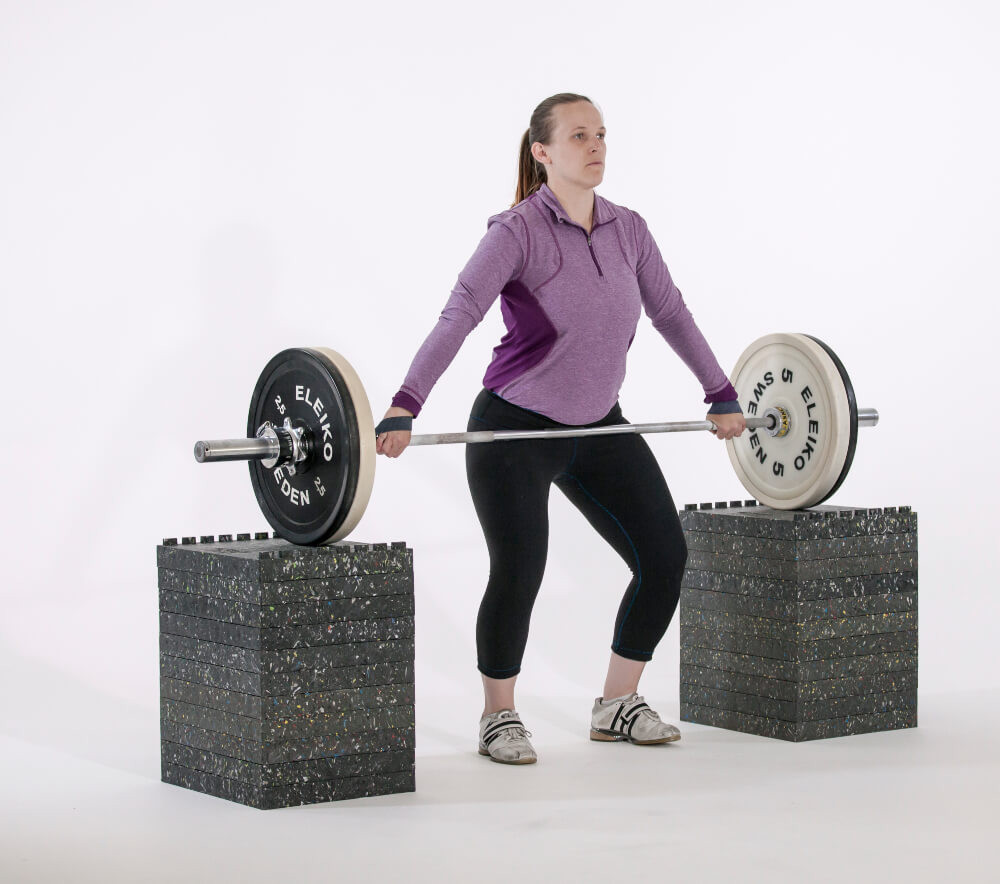 If the athlete has a difficulty finding a good start position I instruct the following:

1) Set the bar on blocks at approximately the right position. 2) The lifter executes three vertical jumps in rapid succession. On the third jump, the athlete holds the landing position, as if ready to jump again. 3) I have them extend their arms downward into a wide snatch grip position. 4) Have them waddle forward to the bar and compare the heights of their hands/knuckles with what I have set up. 5) Make adjustments accordingly. Over time, this position can be modified to attain exactly the same alignment as when the athlete lifts from the floor.

The movement is similar to a jumping movement with a simultaneous effort of the leg and torso muscles to propel the barbell upwards. The movement is a simple, but violent, "explosion" upward. The athlete forcefully extends the ankles, knees, and hips, (a.k.a. "triple extension") and then shrugs the shoulders by contracting the trapezius muscles of the upper back. 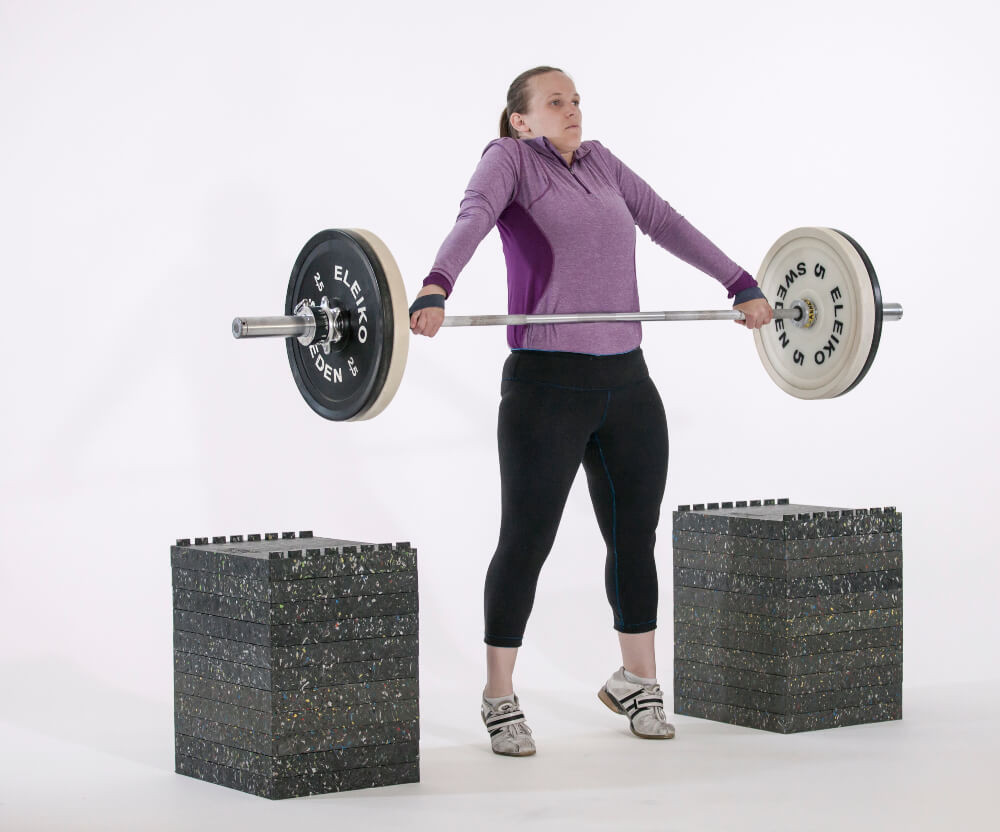 Performing this exercise is appropriate for all athletes, as this is the exercise that develops pure power for athletes in any sport requiring power. This is a low skill exercise with little time needed to teach and master, and the risk of injury is minimal. Mastering this exercise is of paramount importance for elite athletes and weightlifters. Athletes can move heavy weights quickly and develop power by taking advantage of the overload principle, having the athlete lift heavier weights more safely than from the floor.

The lifter should be able to hold this position without falling forwards or backwards. It is acceptable if the athlete holds this position momentarily and subsequently slowly "creeps" backwards necessitating a small lean, or step, rearward.

After the lifter masters a balanced and explosive second pull it is time to move to the complete power snatch from high blocks exercise.

Set up as before.

This time instead of pausing at the top of the second pull the lifter keeps the bar close to the torso and aggressively pulls under the rising barbell (don’t swing the bar away from the torso). By keeping the elbows to the sides and sharply flexing the wrists the barbell shoots upward while the lifter gets ready to catch the bar overhead.

Note in Photo 3 the lifter’s hair is moving upward, indicating she is pulling herself under the bar. Also, note her wrist flexion.

Many athletes think the snatch is magical: sometimes they make the lift, sometimes they don't, but they don't know why in either case. Many times this is due to a lack of bar awareness, as they don't "feel" the bar, or know where it is overhead, and then it comes "crashing" down on them, out of control.

To correct this, the athlete should pull upwards such that the backs of the hands elevate towards the ceiling. The wrists remain flexed. To catch the barbell overhead simply extend the wrists and the rotating bar turns over with minimal horizontal displacement.

This increases bar awareness maintains the athlete – barbell connection and optimizes the catch position for the power snatch. 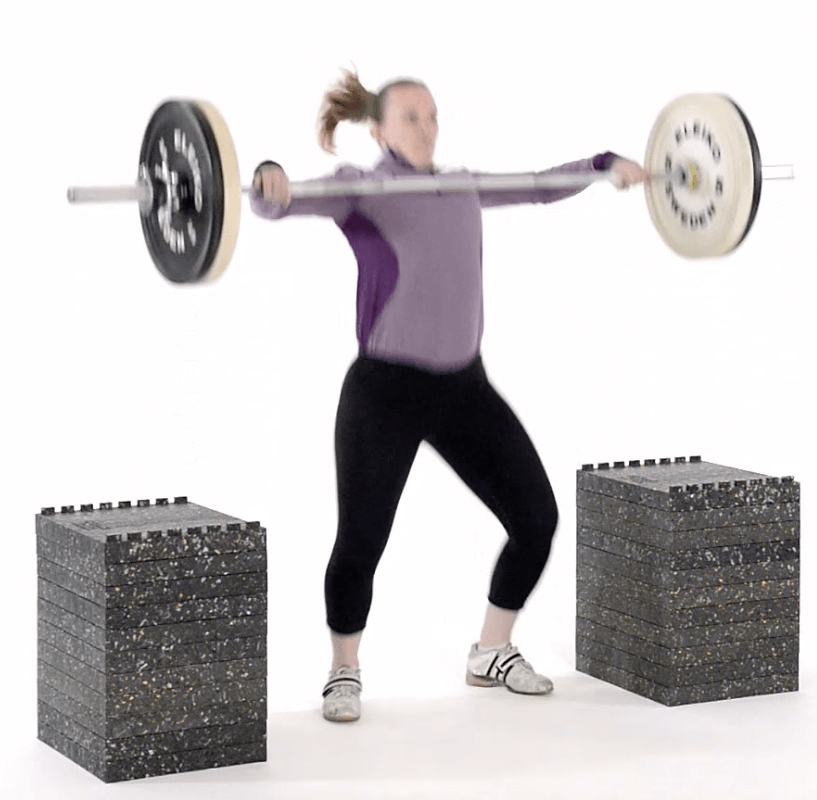 In one motion, the feet skip out slightly; the athlete catches the bar overhead, or above the shoulders. The shoulders are externally rotated so the front of the elbows (antecubital area) point upwards. The wrists are extended. To be considered a power snatch maximum knee flexion is about 90°. 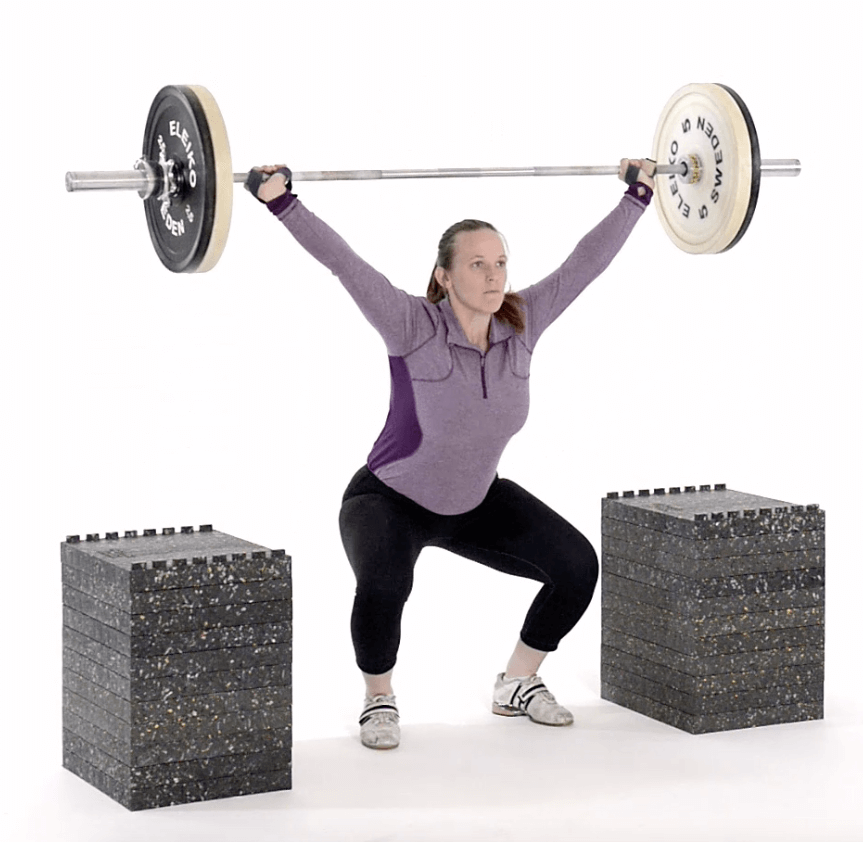 After successfully catching the power snatch overhead, stand to recover. Slowly bend the elbows so the barbell passes in front of the face, and then flip the elbows over quickly, catching the bar at the power position. Reposition on the blocks and continue for the desired number of repetitions. 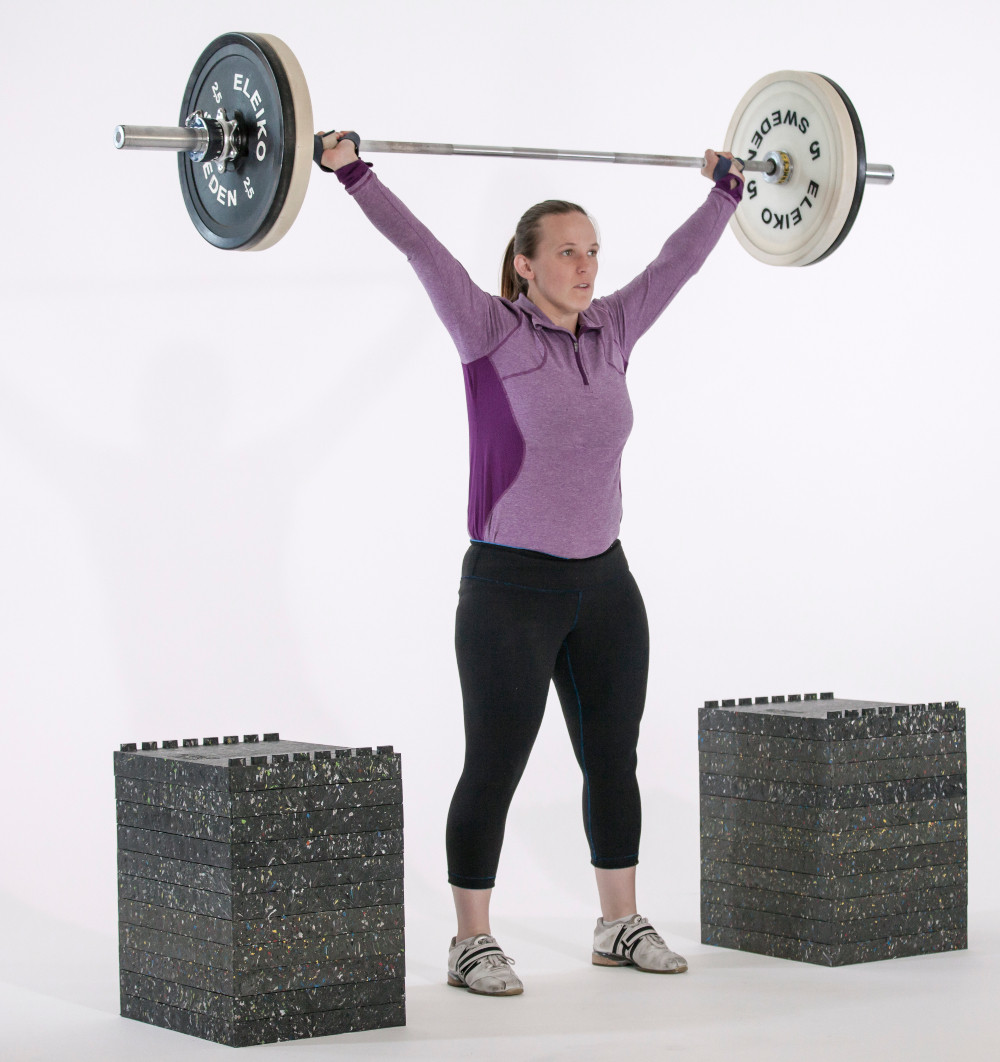 I cannot emphasize enough the importance of lifting from the power, or high block, position. The high block position is an important position from which to teach and learn. Almost any athlete can learn to jump and shrug.

*Although controversial in the U.S., snatch high pulls, pulling the barbell anywhere from 1/2-way between the navel up to the xiphoid process with proper technique (standing erect), is a valuable tool to teach proper movement of the upper extremities relative to the bar.

Lifting from the blocks should emulate eventual lifting from the floor. When power snatching from the high blocks a lifter should be able to manage about 90% (±5%) of their full 1RM power snatch. Pulls/shrugs can be performed with significantly more resistance to take advantage of the overload principle.

There is a difference between the intensity when performing pulls from the high block snatch versus from high block clean position. It has been recommended by the best coaches in the Olympic weightlifting world that snatch pulls from the blocks be limited to approximately 115-130% of the athlete's best snatch. This limitation is in place so an athlete continues to develop speed needed for the snatch. If the pulls are trained too heavy, the athlete's snatch becomes slow and they will fail to improve. Save the heavier, slower pulls for the clean pull. This will not sacrifice the speed needed for the clean.

For non-weightlifter athletes, pulls and shrugs can be performed at all times: off-season to develop power, and in-season to keep it. Here is a guideline to use with snatch exercises from the high block position:

* If the athlete is not a competitive Olympic weightlifter, the percentage can go to 135%.

Training from the blocks is an efficient and effective training tool to safely develop technical proficiency and power. As the athlete becomes technically proficient, they can learn to safely lift heavier weights with increased speed. You can progress them to lift from the knees and then the floor, technically more demanding positions for both the athlete AND you. 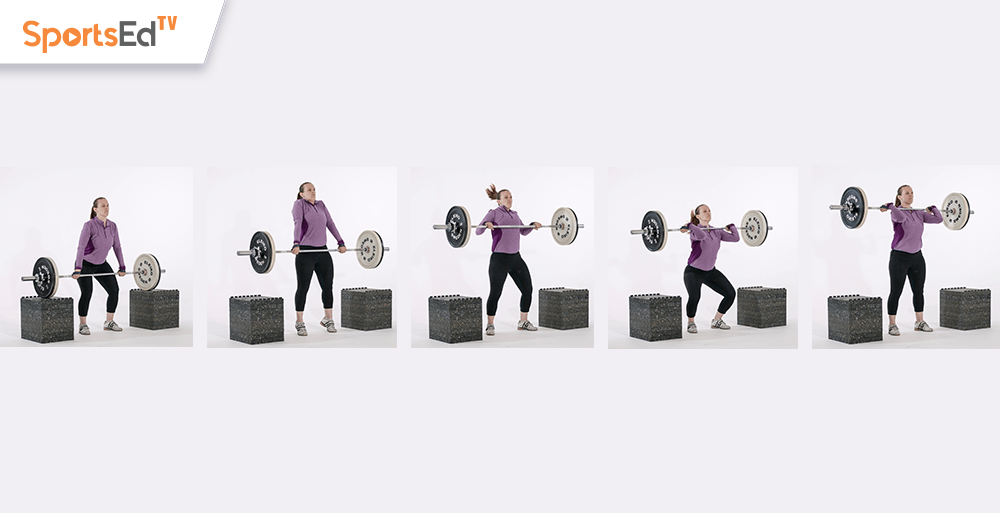 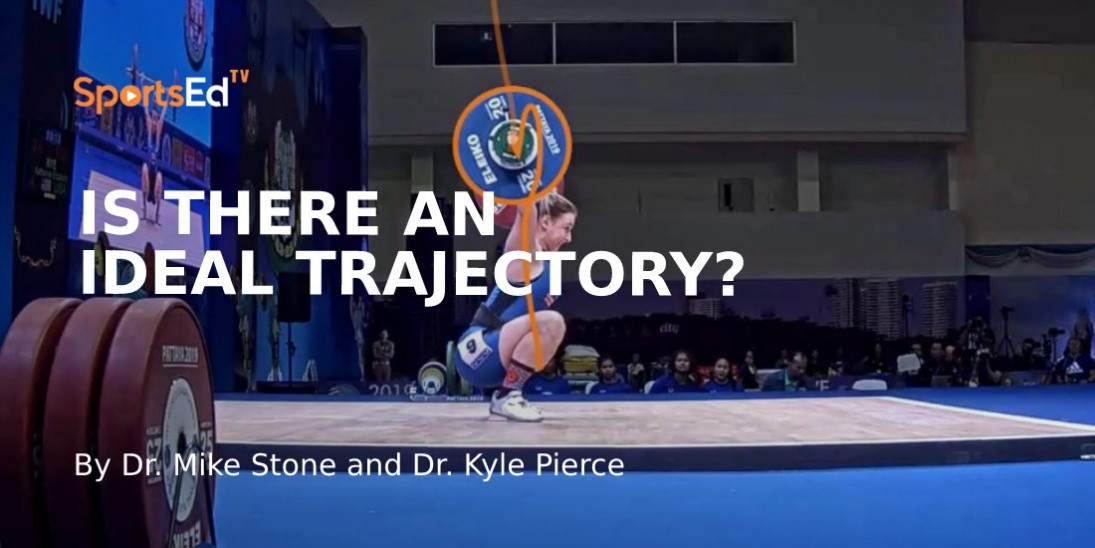 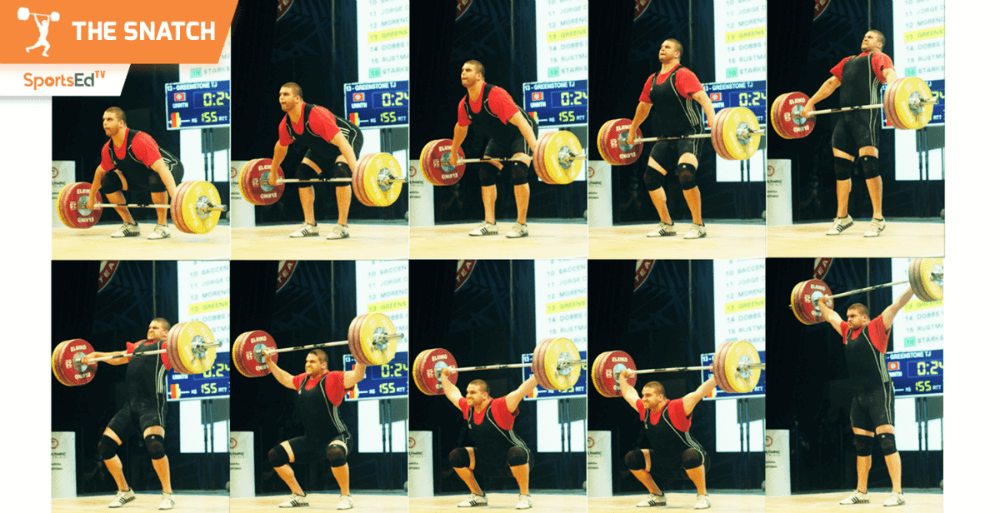