Hybrid Serves in Volleyball: Understanding these new weapons and their tactical applications. 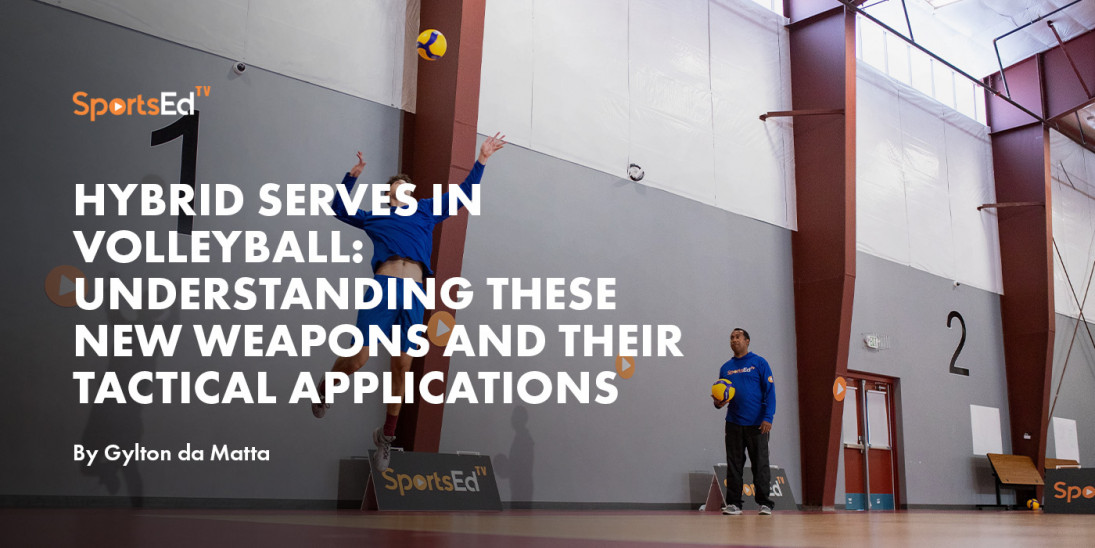 Volleyball has evolved tremendously, which means that the game changes and improves over the years. The most evident change concerns the speed of serve, reaching more than 100 km/hour.

For this reason, different types of serve (i.e., jump topspin and jump float serve) have been investigated in the literature to better explain when and how to perform these serves in practice and game situations.

Players should select to use the serves they can perform best. Therefore, the authors suggest more investigation in Sports Sciences to examine methods of training that can enhance the technical performance of serves, thus, to create greater difficulty for serve-receivers (Moras et al., 2008; Buscà et al., 2012; García-de-Alcaraz, Ortega, & Palao, 2016).

A critical review of serves in volleyball explains that all serves if executed well are effective. However, a new type of service has been performed by some players at elite levels, as reported by Dr. Da Matta in his technical reports in the U23 world championship and the Men’s and Women’s World Championships in Poland and Italy.

In fact, although serving analysis catches the attention of many volleyball scholars, there is a lack in the Motor Learning literature on hybrid service. Therefore, in this article, we will discuss the main aspects of this type of serve as well as its variations in order to better understand its tactical applications in the game. Therefore, we will:

The literature has been proficient to describe serving styles and tactical application has been explained through the types of serve, jump topspin and jump float (Moras et al., 2008; Buscà et al., 2012; García-de-Alcaraz, Ortega, & Palao, 2016). The jump top spin, power and drop, as well as, the jump float has been adopted to confront different configuration of reception systems.

Since the 80’s there has been a huge evolution of types of serves performed against different passing configurations. Figure 1 represents the serve trajectory sought by players through the jump topspin serve (power) when two passers are used on the court. This was the categorization adopted by the 1984 and 1988 Brazilian players Renan Dal Zotto, Montanaro and William Silva which contributed for Brazil to win the Silver medal in two Olympic Games. For instance, from 1992 until 2002 many elite players were still serving from the ground while the whole team of Brazil was performing jump serves.

In our understanding, over the years, the tactical issues between styles of serve and the different configurations of the reception system has contributed to the evolution and decision making of the type of service to be performed across the levels of expertise (Da Matta, Gagen & Rhoads, 2013). In this context, the reception system has evolved to three and currently, up to four passers to better cover the space on the court. Likewise, different types of serve have evolved to overcome the different configurations of the receiving system. In the next sections, these aspects are detailed. 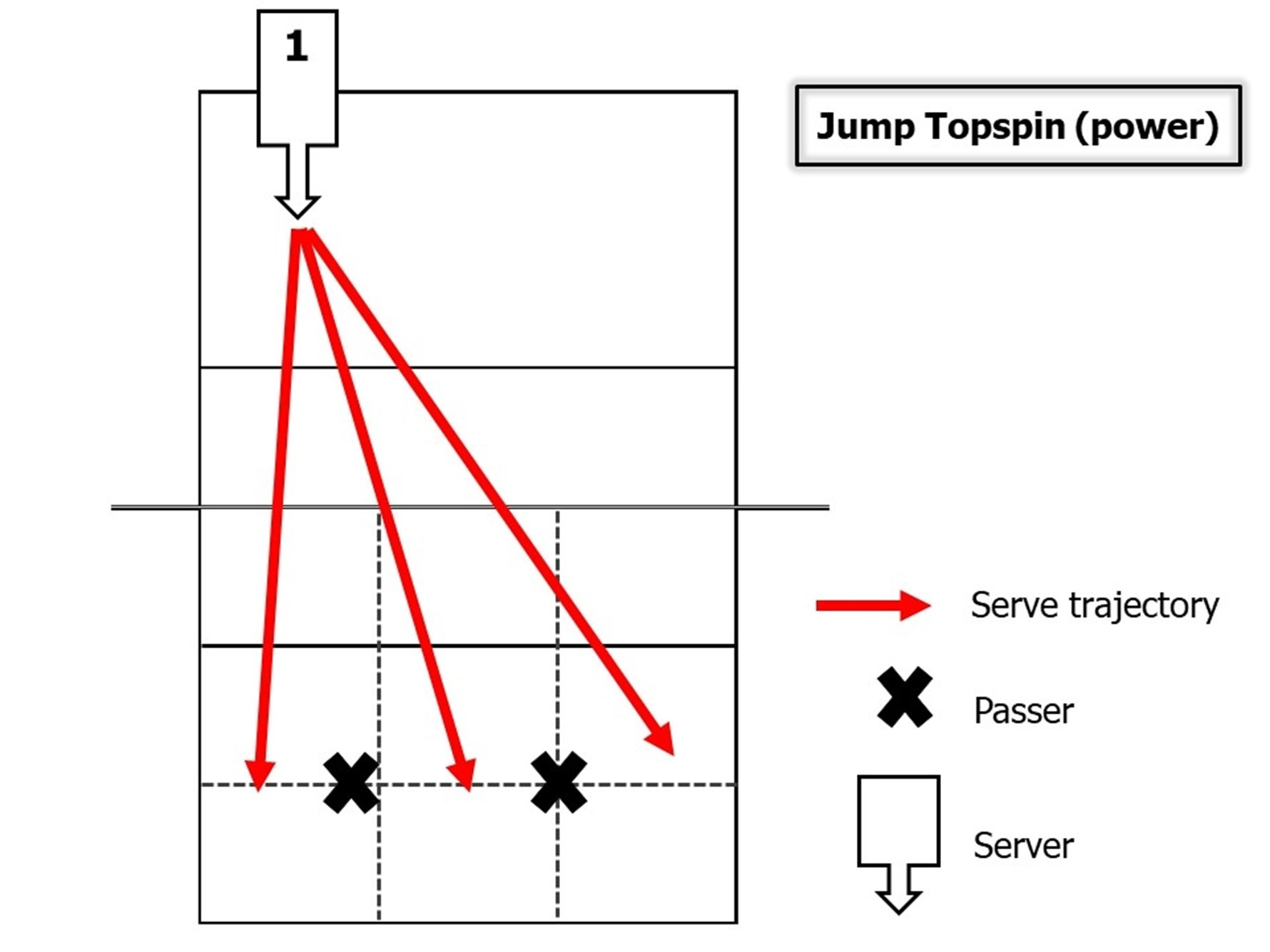 The players have developed another very interesting strategy to make the serves even more efficient. The hybrid serve is a technique in which the player elicits to do a certain type of service, such as topspin, and during the ongoing movement, usually while airborne, the server changes the strike technique finishing the movement, delivering a different serve, like the jump floater.

The key point of the hybrid serve is to keep the same pattern of movement as the originally displayed serve (i.e., origin of the serve, approach through the step-close and release of the ball). This aspect makes the hybrid serve challenging for passers, because only in the aerial contact of the servers' hand on the ball will passers be able to “read” or to identify what type of trajectory and effect the ball will display.

The unpredictability of which trajectory the server's ball will perform is the advantage and the innovation that the hybrid serve provides. Basically, the Hybrid Serve features two variations: Topspin-Floater and Floater-Topspin configurations.  Please understand that even when serve-receiver can prepare to pass a predicted type of jump serve, it is very difficult to pass such serves, even at the elite levels. But many great passers have “neutralized” jump serves but simply passing the ball up to the middle of the court. Nonetheless, when Hybrid serves are performed, the rate of efficiency and effectiveness leads to aces or an automatic free ball for the serving team. These two configurations are described below through the developmental analysis of both serving styles.

Hybrid Serve I (first type) - from Jump Topspin into Floater

The server assumes a posture to perform a Jump Topspin (going further back at the serving zone, holding the ball with the same dominant hand and preparing to toss a spinning ball to serve).

While holding the ball with the right hand, the server should be prepared to serve with the right foot in front, at the initial position. All of these clues elicit a Topspin serve.

The server will toss the ball at 3-3.5 yards high, through a spinning action and start a typical three steps approach to spike serve the ball.

From the initial position holding the ball on the right, the server will perform a left, right-left approach to takeoff.

Immediately after the toss, the server will typically utilize both arms dynamically from pendulum back to upwards but in the air (at the peak of the jump) contact the ball using the compact floater with flat hand. Performing a floater strike.

The arm should follow-through with a "freeze action" in front of the chest and at the midline of the body.

The landing should be controlled, with both feet and the body should be leaning forward.

After landing the server, should always move quick to his/her home base to play defense.

Figure 2 highlights the different types of serves used, with emphasis on the hybrid serve (topspin-floater) when the disposition of the reception system is deeper on the court. In figure 2, passers position serve-receive to pass the Topspin. In this case, the server surprises the passers by delivering a floater, at the last moment prior to ball contact, executing a low speed floater with a flat trajectory and in front of passers. Furthermore, Fig.2 highlights the spot (intended target) where the trajectory of the hybrid serve could be more effective. The red spot (general target) should be the goal for intermediate players and the gray box should be the goal for advanced players to reach during practice and game situations (Figure 2).

This next section represents the second type of hybrid serve (Floater-Topspin) with its main features, characteristics and applications.

Server assume a "Jump Floater Stance" (ball at the non-dominant hand, body leaned forward with the opposite foot already in front of the body or ready to start both the approach and the toss). All of these cues elicit a Jump Floater.

Server elicits a "Jump Floater" by lifting the ball (no spin) in front of the body, while the hitting arm pendulum backwards.

Approach with three or two steps; either step, step-close or just the last two steps step-close (right-left for the right-handed and left-right for the left-handed).

Jump has to be maximized through the use of the dynamic swing or the hitting arm.

The hitting arm should be in pronation and very relaxed, prior to contact; and then the already scooped 'wrist' generate a "splash" sound.

After the takeoff, in the air, the server relaxes the arm and strikes the ball with a wrist snap delivering a topspin serve.  The arm swing is fast and powerful.

The contact is in front of the body, 5 to 1 yard (onto the court) projected in the court.

The hitting arm should follow-through at the midline of the body.

The server should have a good landing on both feet, always going forward.

The landing should be controlled and with a cushioning motion at the knee and hip joints.

After landing, the players should move to their home base position to play defense.

Figure 3 depict a reception system for jump floater with an advanced reception line to passing overhand, to the 4 m line. In this example, a strategy would be to perform the hybrid serve (Floater-Topspin) to reach trajectories with topspin for the deep of the court.  In our analyses, we have observed that even the best liberos in the world can not pass the topspin ball delivered in the Hybrid Serve Float-Topspin.

In men's volleyball, the receivers usually moving forward to passing a jump float, standind closer to the 10-foot line to pass using the overhand technique. Therefore, when the receivers take a position in relation to a certain serve, and the player on the service serves a different one, this will increase the odds of an ace or passers chanking the ball (very bad pass).

In women's volleyball, including American college, women use less of the overhand pass moving forward the reception system.  But, due the fact that the net is significantly lower than men’s net, when servers use the hybrid serves, aces and shanks are inevitable. Moreover, Fig 3 highlights the spot where the trajectory of the hybrid serve could be effective. This spot (general target) should be the goal for the intermediate players to reach during practice and games and the gray boxes represent specific targets for more advanced servers. (Figure 3). 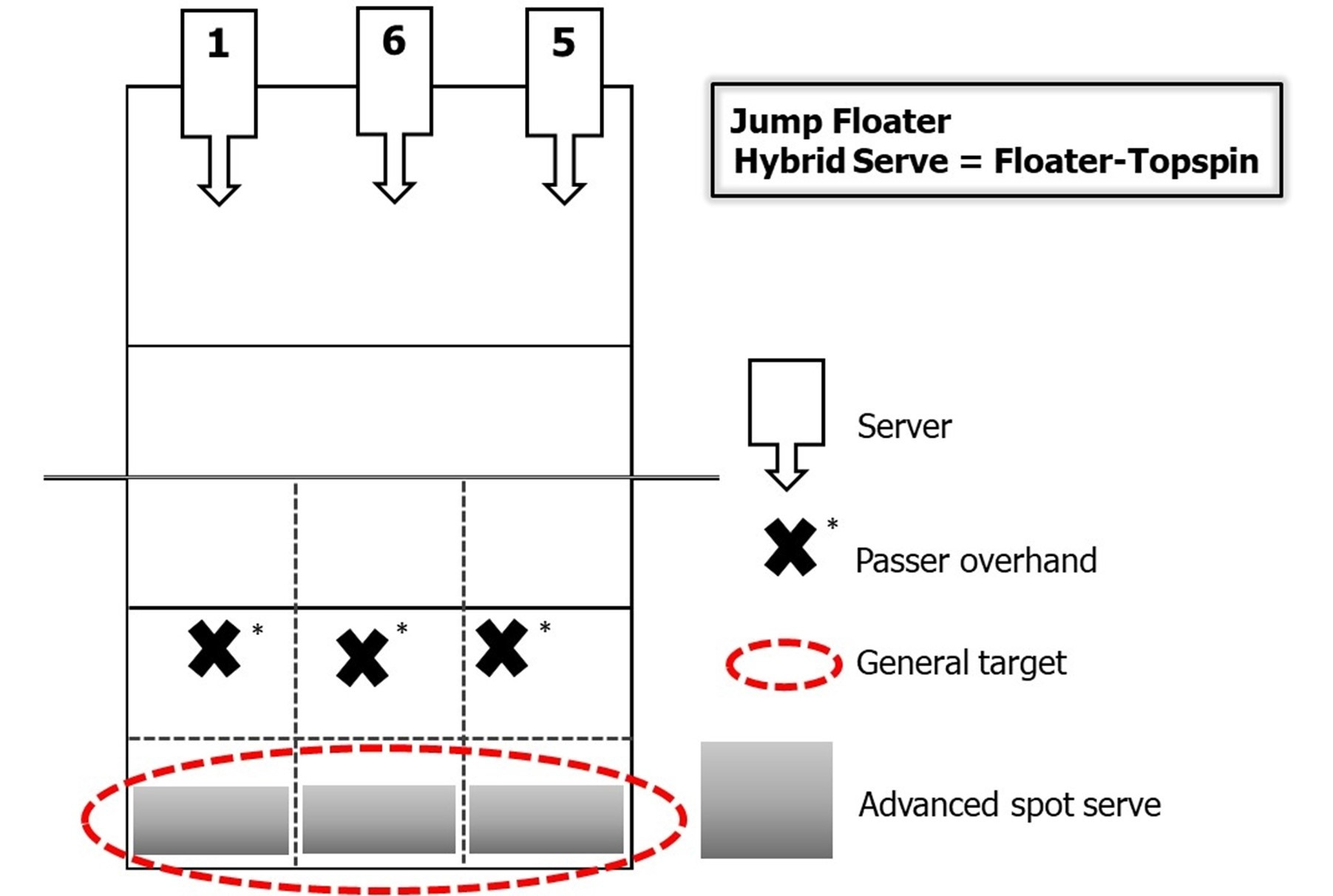 Another scenario that has happened in men's volleyball is the adjustment for power Topspin servers in which four players assuming the orientation to pass using the underhand passing form. Figure 4 represents a reception system with 4 players, including the opposite player, to assist in the reception of power jump topspin serves.

This procedure has been used in men's volleyball due to very powerful serve and some rotations allow the opposite to assist the reception of serve mainly in position 1. Based on this, the hybrid serves (Topspin-Floater) could be an excellent alternative to surprise the reception system. In women's volleyball, including American college women’s, there are fewer players performing power jump topspin serve, so a four-player reception system is less common.

In addition, it highlights the spot where the trajectory of the hybrid serve could be effective. The red area (general target) should be the target goal for intermediate players and the gray boxes for advanced servers to reach during practice and games (Figure 4). 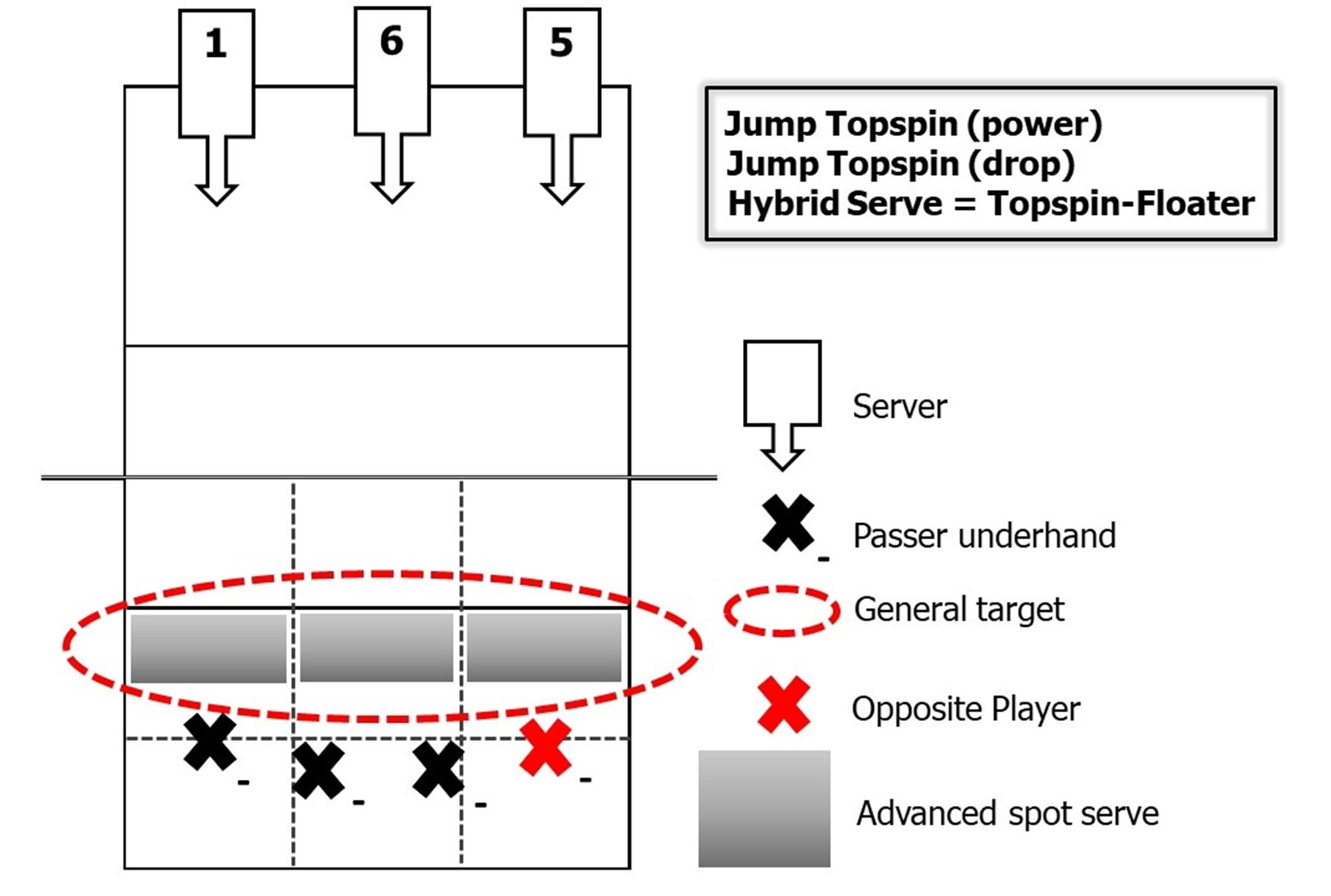 Our purpose with this article is to offer scientific thoughts about advanced tactical performances in serving in volleyball by analyzing the different configurations of the receiving system. In addition, we want to provide thoughts on the different types of serves to be performed against the positioning of the passers, thus developing critical thinking players and autonomous performers.

Finally, we want to clarify the foundation of hybrid serves and encourage the proper teaching of this skill during player development because it can be very efficient and effective towards surprising your opponents at any level.

The teaching and development of proficient Hybrid servers is the future trend at elite volleyball competitions.

Volleyball players adapt and adjust to what they practice. We believe that these skills need to be properly taught at younger ages and when athletes are older, they can refine and become proficient performers at the high-level volleyball.

Danilo Arruda is a graduate Assistant finishing his Master of Science degree at the University of Wyoming/ Motor Learning and Motor Control Department.  His is a co-author and Volleyball coach at Youth Sports Academy as well as a SportsEdTV contributor. 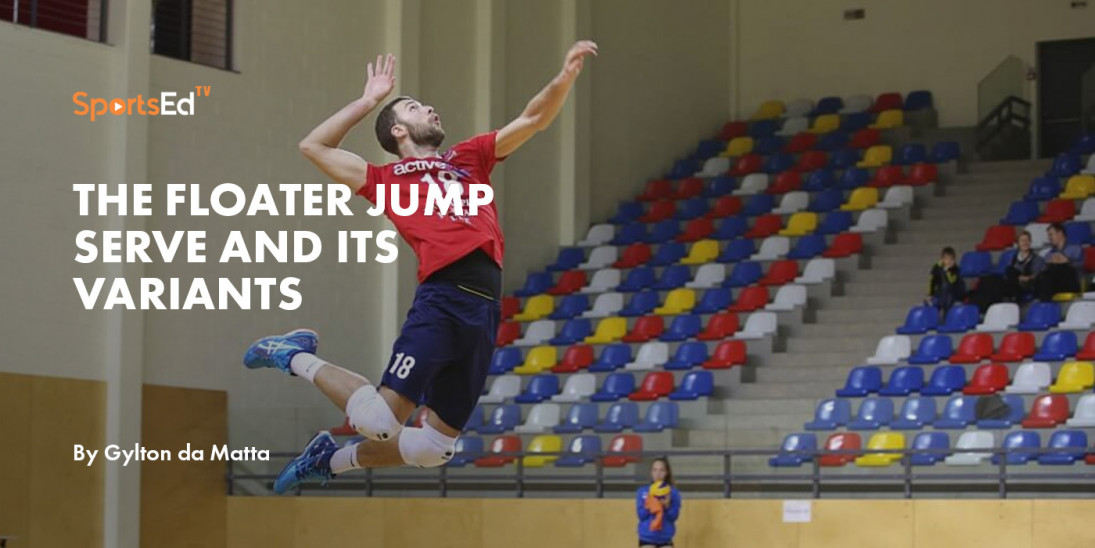 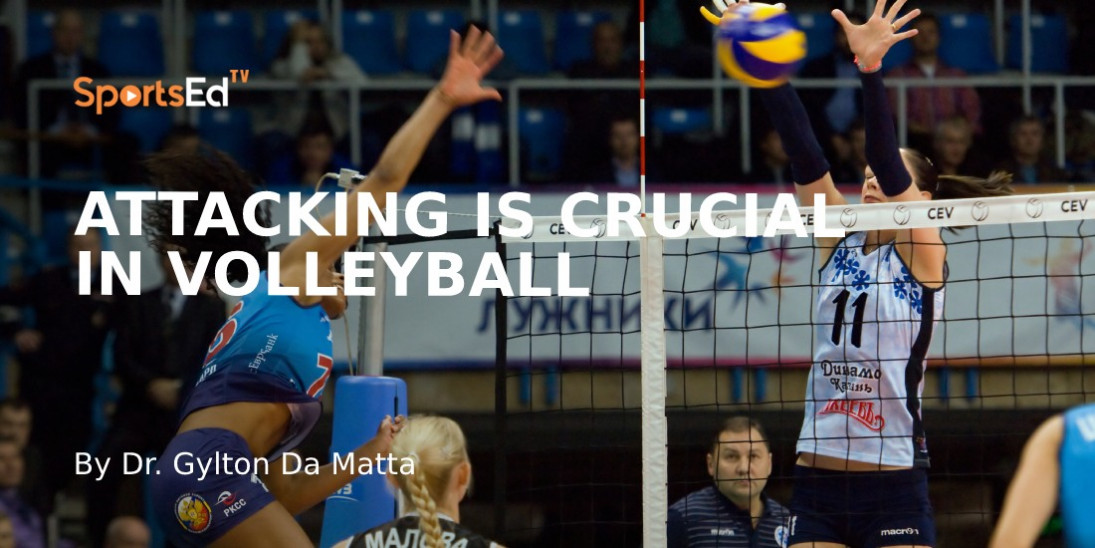 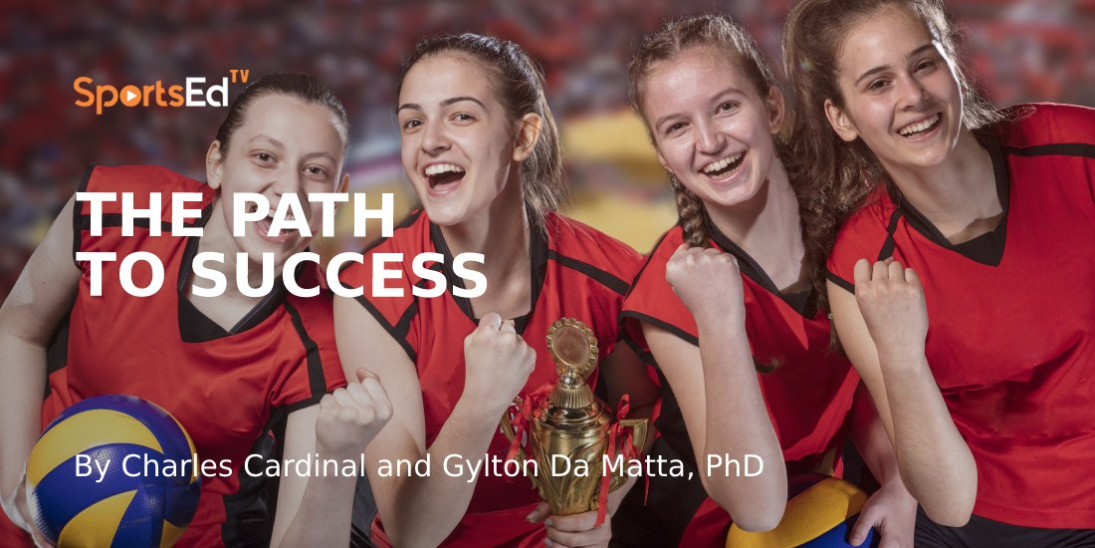 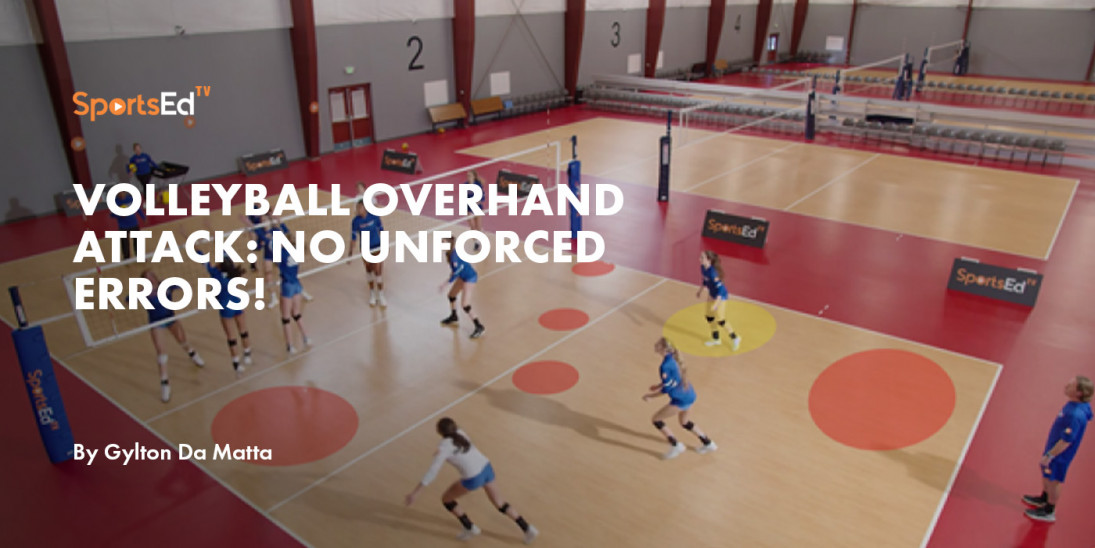 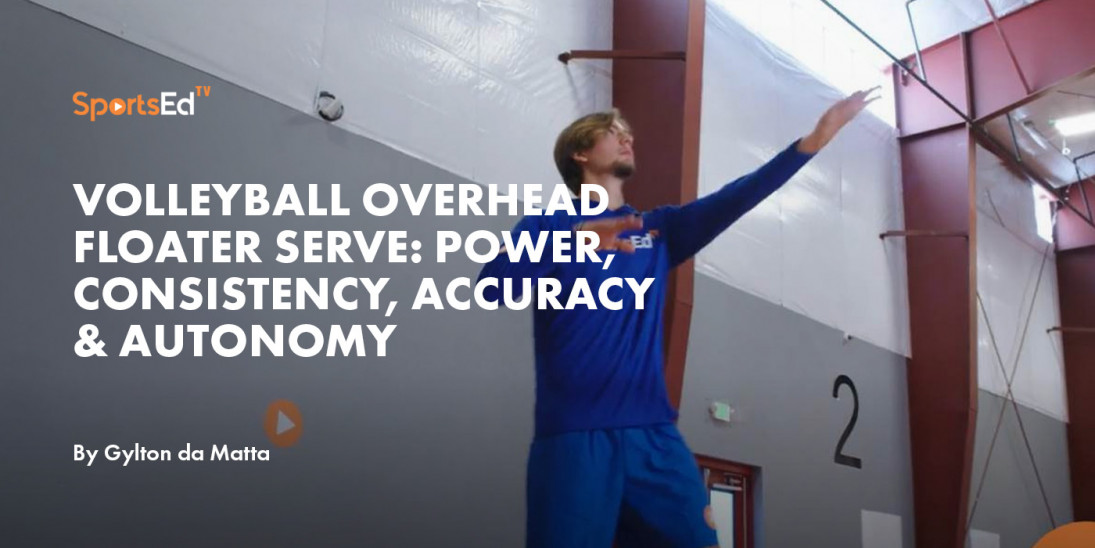