Does Previous Concussion Put You at Risk for Injury? - Part IV

Throughout this blog series, we have been talking about concussion and how concussion can increase your risk for lower limb injury up to three years after your concussion. One thing we naturally ask ourselves is why? Why is it that a concussion would put us at a greater risk of lower limb injury? In the last article, we talked about to things we see in our concussed athletes and how we can measure them. Time to stability (TTS) and how much surface area you cover are two things we see in our concussed athletes that we know put you at greater risk for injury. We see this in our athletes with a history of concussion but whose concussive symptoms have completely resolved. This is really important to understand because what we are talking about are residual symptoms that continue and if not addressed may not improve to the athlete’s baseline. Last week, we talked about how you can measure both TTS and surface area covered during single leg hopping activities. 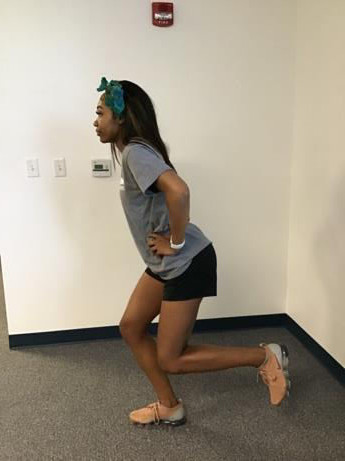 One thing some authors hypothesize is that both the TTS and surface area covered are associated with balance. This is somewhat true. If we test an athlete in single-leg squatting motion or in single-leg hop, the testing procedure is such that the athlete has the opposite limb in slight hip extension with knee flexion and they are not allowed to touch the opposite foot down at any time during the testing procedure (as depicted here). We use this position because this mimics the running position or explosive jump position and we know that this position requires a lot more gluteus medius and maximus activation. This activation is required to stabilize the knee (which we will talk about in a second). While in this position, we will have the athlete perform multiple repetitions (10) and not allow them to touch down the opposite foot at any time. What we find is that athletes who have had a concussion lose their balance more than athletes who have not been concussed. What this means is they have to touch their opposite to the ground multiple times in order to keep from falling over during the test. Keep in mind, this is despite being cleared for concussion, cleared for any vestibular symptoms, and not having symptoms with increases in sports demands.

What we often see, is when the athlete losses balance, this loss of balance results in more rotation that occurs at the knee, and this is one component that can put a lot of stress on the ACL as well as other structures. In addition to the loss of balance, what we also see when comparing concussed athletes with non-concussed is there is greater motion at the pelvis and knee. At the hip, when an athlete is performing a single leg squat (like above), there tends to be a lot of motion at the hips. Three main motions we see are depicted below. 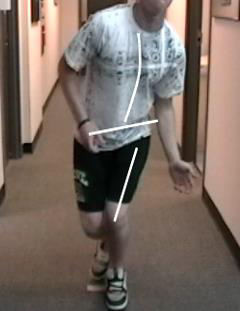 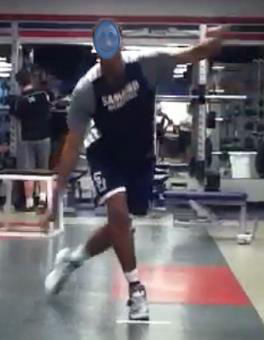 These are some of the most common motions seen at the hip but not all. From left to right indicates a greater degree of weakness that when identified can be addressed. In addition to the movements we see at the hips, we also see an increase in the magnitude and speed of motion of the knee in the frontal plane. As depicted here, when the athlete performs a single leg squat, their knee tends to fall in toward the midline. When comparing concussed athletes to non-concussed athletes, what we see is concussed athletes this motion occurs more readily, the motion is larger in magnitude and it happens at a higher rate of speed. These are all factors that increase risk and what we know is the larger the magnitude is and the higher the speed is, the more likely it is to impact both risk and performance.

The last thing I will say about this is that all these motions result in a loss of kinetic energy and force output. This means that if your athlete with a previous history of concussion is demonstrating any of these motions we talked about in the last two weeks, it means they are not running as fast, jumping as high, or hitting with the same power they would do if these movements were corrected. So although this is only starting to become more evident in the research (the impact of concussion on future performance) we now know what to look for and know how to train.

Next week we will dive into some specific exercises to improve this. Keep in mind, as I said that the beginning of this series, I am NOT a concussion specialist. But, once concussion symptoms are resolved, it is important to assess these motions and if they are present, train your athlete to improve them. Improvement in these motions NOT only reduces the risk of injury to the lower limb but also reduces the risk for future concussion. Again, the idea with all this discussion is to provide you with the knowledge that this exists, an understanding of how we can assess this on the field, and how we can create exercise programs to address. I hope you find this useful and Stay Tuned!