Brian Derwin is a former National Champion and member of the 1980 USA Olympic Team. He previously served as president of USA Weightlifting, and now is the coach of Team Spartacus (MN). Coach Derwin notes that the increased number of lifters at national and local meets has resulted in a new challenge: proper officiating of the lifts.

Weightlifting’s growing popularity has resulted in a need for more officials (referees, technical controllers, announcers, etc.) in order to conduct larger events. One cannot be too critical of volunteers, but this need for more officials has likely resulted in some inexperienced individuals determining a lift’s validity. An official does not need to have any personal lifting experience, but looking around at some meets, one might wonder if the person judging the lift has ever competed.

From the Olympics to local meets, we now see instances in which the jury overrules the referees, sometimes in favor of the lifter, sometimes to the detriment of the lifter. Perhaps the most frequently challenged officiating call is that of “press out.” The interpretation of the press out rule seems to have been greatly tightened in recent years. This has caused serious concern among coaches and lifters as to why certain lifts may be turned down. It is encouraging that we now see the IWF’s use of Dartfish software for video playback at the jury table in order to solidify decisions.

Have the rules changed? No! Once the barbell is overhead in either the snatch or the jerk the following rules (from the 2019 International Weightlifting Federation’s Technical and Competition Rules & Regulations, 2.5 Incorrect Movements) have been in effect for decades:

Obviously, these are all pretty similar. #1 = If a lifter’s elbows are capable of being fully extended the lifter cannot have any hesitation in reaching full extension. #2 = the lifter cannot continue to extend the arms (elbows) after hitting the bottom position. Taken literally, it sounds like a lifter could continue to lower (push downward) into a bottom position as long as the barbell is not further elevated. #3 = once locked out the elbows cannot “bend and extend” while returning to the final position.

Coach Derwin’s Team Spartacus lifters have been the victims of some questionable officiating decisions. Here are his thoughts on how to improve the chances of success on the platform, especially when dealing with “overzealous officials.”

I have been a traditionalist in teaching jerk technique. Seen from the side, the final overhead bar position has the arm essentially covering the ear. The picture below is an example of this. 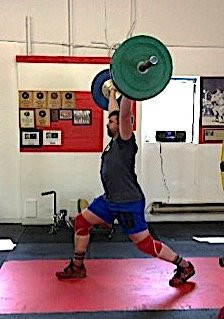 Notice the bar, shoulder and hip are in a vertical line and the arm covers the ear. Additionally, the forward heel is in front of the knee and the back leg is bent a bit, carrying most of the weight over the back leg.

Currently, I find that many lifters encounter overzealous officiating relative to “press out,” with red lights resulting more frequently than in the past. This prompted me to explore some options. Moving forward let’s focus on the bar, head, shoulder and hip positions, and the solution I used to see more white lights.

In our Team Spartacus training hall, we have sequence posters of 2008 Olympic superheavyweight gold medalist Matthias Steiner performing his winning 258kg jerk. I noticed in his jerk drive (after the dip) the bar goes slightly back (not directly vertical) and the head pushes through forward. The result is a solution where the bar is back over the shoulders, but the head is pushed forward a bit. I found that this position is more likely to prevent arm re-bend or classic press out. 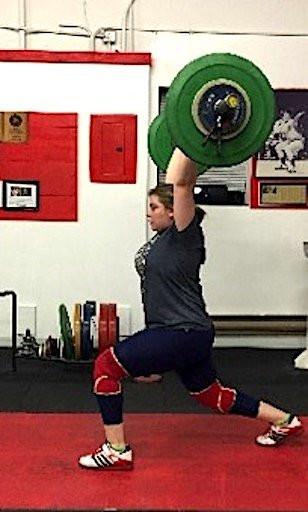 Note: check this picture of Steiner winning lift to see his position, accomplished by wrist extension (palms up).

In Photo 2 you can see the bar is back a bit, but still the bar, shoulder, hip form a vertical line. The head is a bit forward and still looking straight ahead, not down. Our initial efforts showed improved ability to lock out and stay locked out. The question then becomes: how is this slight adjustment easily implemented?

Keep in mind that I believe if you have seen one athlete, you have seen only one athlete. Some adapt just by a conversation and a couple of training attempts. Others need various exercises to achieve the result. Below are the five exercises I used in various combinations.

The emphasis on this exercise is for a short dip, an abrupt change of direction, and finally a rapid press out. We emphasize moving the bar back and up, pushing the head through a bit. Speed is important. 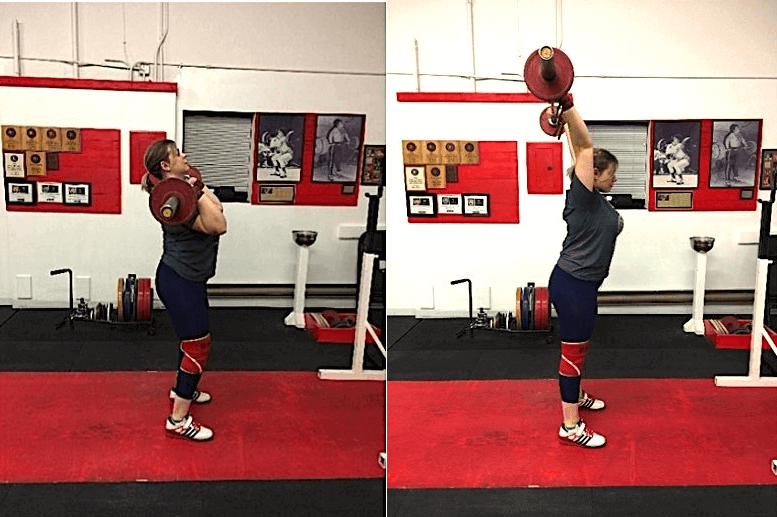 This exercise reinforces a strong split position. Most of the weight is on the back leg. The bar moves back a bit and the head comes forward a bit. The bar ends up over the shoulders and hip. 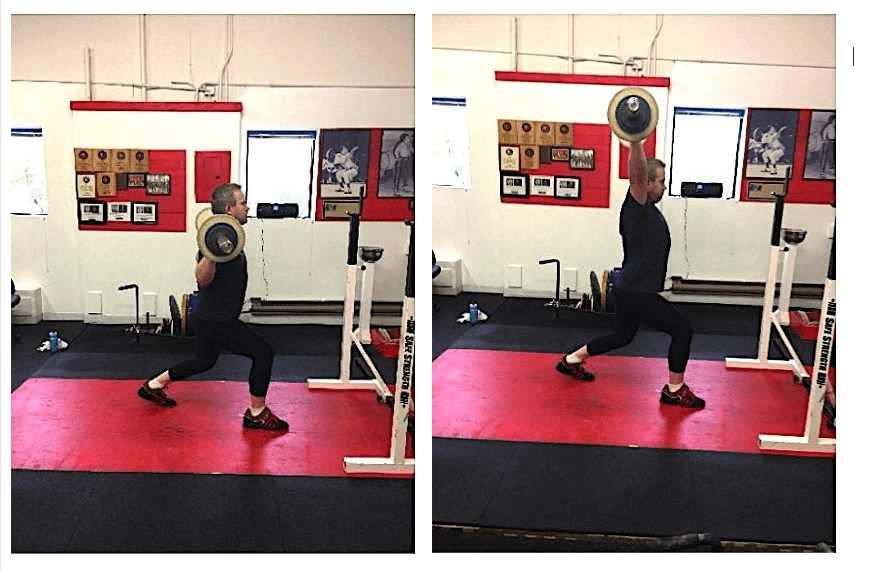 This exercise also reinforces a strong split position. Most of the weight is on the back leg. The bar starts in front, on the chest and shoulders, with a greater emphasis on moving the bar up and back. As the bar moves back the head comes forward a bit. The bar lines up over shoulders and hip. This exercise has more emphasis on moving the bar back than the Split BNP. 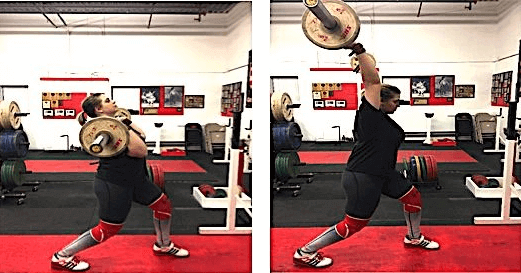 I use this drill to get the athlete to step through and get the bar vertically over the shoulder and hip. The weight used is rather modest. The first photo is the set up. The second photo is the dip of both legs. The bar is launched on the way up. Once the bar launches the back foot stays on the platform and the lifter kicks the heel of the front foot forward of the knee. In the third photo, the bar finishes back over the shoulders and hips.

In the starting position, the bar touches the forehead with the head inclined backward a bit, knees slightly unlocked, toes up to focus weight on the heels. The action is to get under only, there’s no boost from the legs. The finish position has the back leg bent, front heel even with or in front of the knee. The bar finishes slightly behind the head. The weight on the bar is modest. Since both 15kg and 100kg fall at the same rate, more weight is not more valuable. This exercise is designed to learn and repeat the movement as an automatic response. 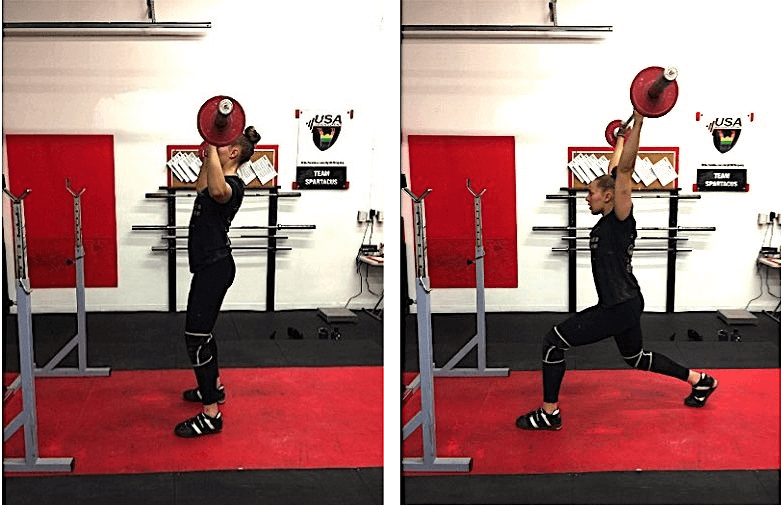 I hope you find these exercises useful and helpful, especially if the referees tend to red light your jerks!!

Editor’s note: The light barbell in some pictures appears in a somewhat exaggerated position.

Brian Derwin, Weightlifting Coach, SportsEdTV Contributor I Started to do Weightlifting the end of my Junior year at Lehigh University under the tutelage of John Garhammer, in 1972. Lifted on my own after graduation in 1973, until
Share This Story, Choose Your Platform!