How Does The US College Soccer Season Work? 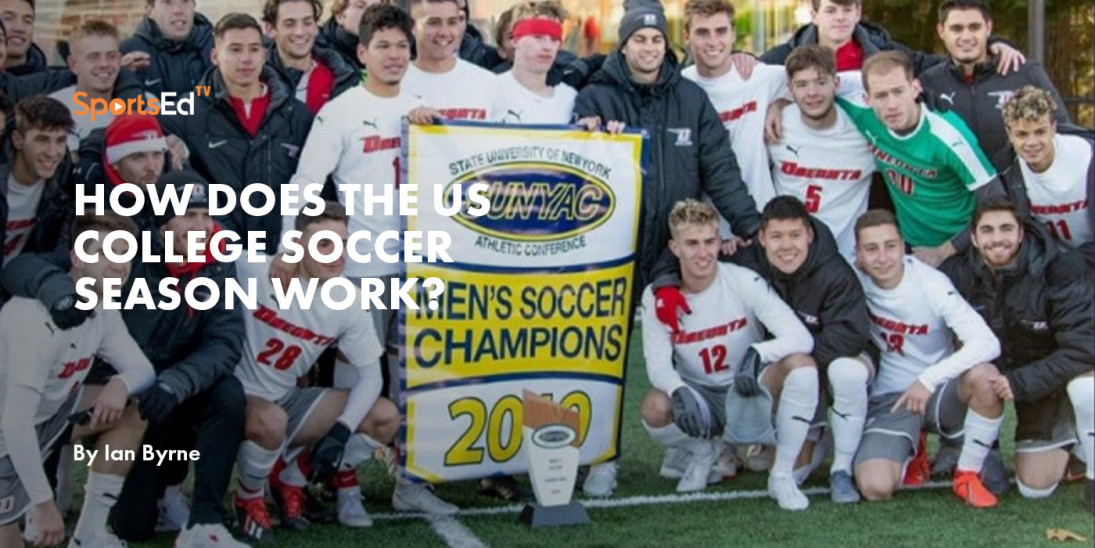 For a limited time only, join SportsEdTV Premium for free!

4. Access our 100s of free resources to help you improve

Iain Byrne, head coach at Oneonta Men's Soccer and former professional player in South Africa, breaks down the complexities and varieties of the college soccer season in the USA.

The good news is that spring has started to show her face up in the Northeast. Snowboards are being shelved while bicycles, hiking gear, golf clubs, and dare I say it, suntan lotion, are coming out of storage! For us, that means we are starting spring practice outside and the boys and I could not be more excited!

This site has many international followers who are probably confused with the timetable of American college soccer. I know I sure was when I first arrived in the USA many years ago. So… I thought I would dust off my inside knowledge of the college scene and break it down for you.

The school year is categorized into seasons and for those of you living in the Antarctic and unaware of this, there are four of them. Give or take a few weeks, they are the fall (Sept-Nov) winter (Dec – Feb) spring (Mar-May) and summer (June-Aug).

The college calendar consists of two main semesters, or terms. They are referred to as the “Fall Semester” (late August to December), and the “Spring Semester” (mid-January to May). The two semesters are separated by a short 4-5 week break over the Christmas holidays, also known as the “Winter Semester” or term. Some colleges offer condensed 5-week courses during this winter term. During the three-month summer period, most colleges do offer summer classes, but they are sparsely attended and often taken online. CONFUSED YET?!

During the two main semesters in the fall and the spring students are present, living on or off campus, attending classes, and competing in their sports.

Our players usually arrive in mid-August for ten days of preseason training. Then, when classes start around the end of August we switch to one practice a day. The season officially starts on September 1, and is split into two segments in what we call the “conference” and “non-conference” schedules.

NOW WE HAVE TO ATTEND BORING CONFERENCES. No, we leave that for the regular students to do….just kidding! Moreover, do not confuse conferences with divisions (division I, II, and III) which I covered in an earlier post….I know you read that one.

With over 500 college teams in soccer, teams are placed into conferences (or groups) with other like-minded schools. At Oneonta, we are in the SUNYAC Conference with eleven other schools that are all state colleges. Other conferences may include small liberal arts colleges, or highly academic schools. Some conferences form geographically, particularly in the more remote areas of the country. YOU STILL AWAKE?

Here is the link to all the conferences in division III for men’s soccer: https://d3soccer.com/conferences

Now let’s get to the fun stuff… actually playing teams. The “non-conference” schedule covers most of September and is where you play teams outside of your conference. These teams can change every year, which allows you to freshen up the opposition. Many teams play in 4-team tournaments early in the year, which also gives the teams a chance to travel and enjoy team bonding activities or sightseeing. These non-conference matches count towards your overall record. There is no points system; it’s just wins, loses, and ties. Last time out in 2019, we were 18-3… which is pretty good if you don’t mind me bragging about it!

Once your non-conference games end, guess what? Correct, you start your “conference schedule”. You guys are starting to get the hang of this. The conference has the same teams each year, so it follows that these games develop heated rivalries. The matches typically cover the month of October, and at the end of this schedule, each conference has their own conference tournament. OH YES….an actual tournament where the tackles get higher and the language a little spicier!

The national tournament consists of 62 teams from across the country. These include all the conference champions, plus the next best 22 teams with the best records over the course of their season. There is a national committee of coaches that meet to go over all 500 team records and compare them based on selected criteria. Here we are in 2013 being selected with one of the 22 at-large selections:

The 62 teams are split into 4 brackets with 16 teams in each. The games take place over the second and third weekends in November and then you are left with the four surviving teams. The four teams head to a preselected site for the NCAA FINAL FOUR, which is a huge event, and ends with a national champion. 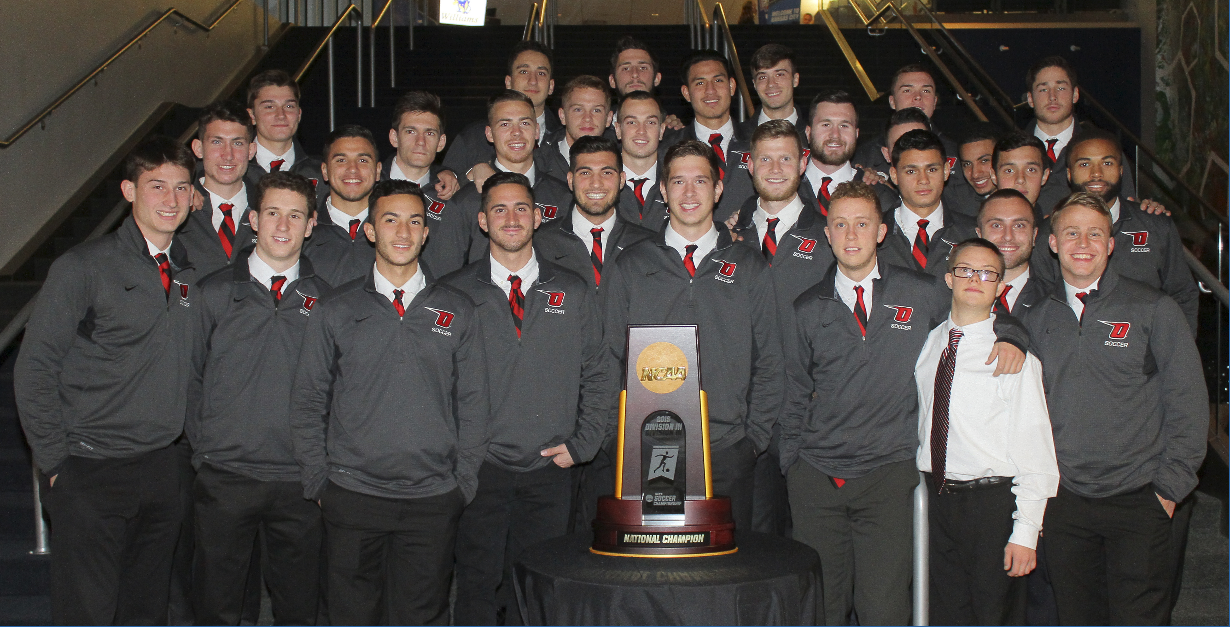 Oneonta at the 2015 Final Four in Kansas City

Once a team’s season ends they no longer practice or play matches. So, what do they do you ask? Well, there is that small matter of attending class and trying to graduate college!

Once teams return in mid-January for the spring semester they have what we call the non-traditional season. During this time they are permitted a specific number of weeks to practice (in division III it is five weeks) and play a set number of matches that do not count for anything (in division III we have only one match). The aim during this semester is for the players to focus on their studies, partake in community projects, and in general enjoy life as a college student… which some of them really know how to do!

In total, teams play a maximum of 20 games during the fall season excluding playoffs. This leads to a relatively cramped season with two matches per week being the norm, and sometimes a midweek game thrown in as well. There are current discussions about changing the format and having the season spread over both semesters. The arguments are that this condensed season results in a higher rate of injuries, causes too many missed classes, and is bad for player development.

If you have made it to this part of the post, you are really enthusiastic about college soccer or you are reading it again for the third time! Luckily for all of us, soccer is a simple game. It’s the administrators and organizers that overcomplicate everything!

Thanks for hanging in with me.

I would be happy to answer questions you have about college soccer in the USA... Shoot straight to iain.byrne@oneonta.edu

DRILL OF THE WEEK

Iain Byrne   Iain Byrne is the head coach at Oneonta, and played professionally for Durban City and Arcadia as well as the South African National Team.
Share This Story, Choose Your Platform!
Please sign in in order to rate the blog. 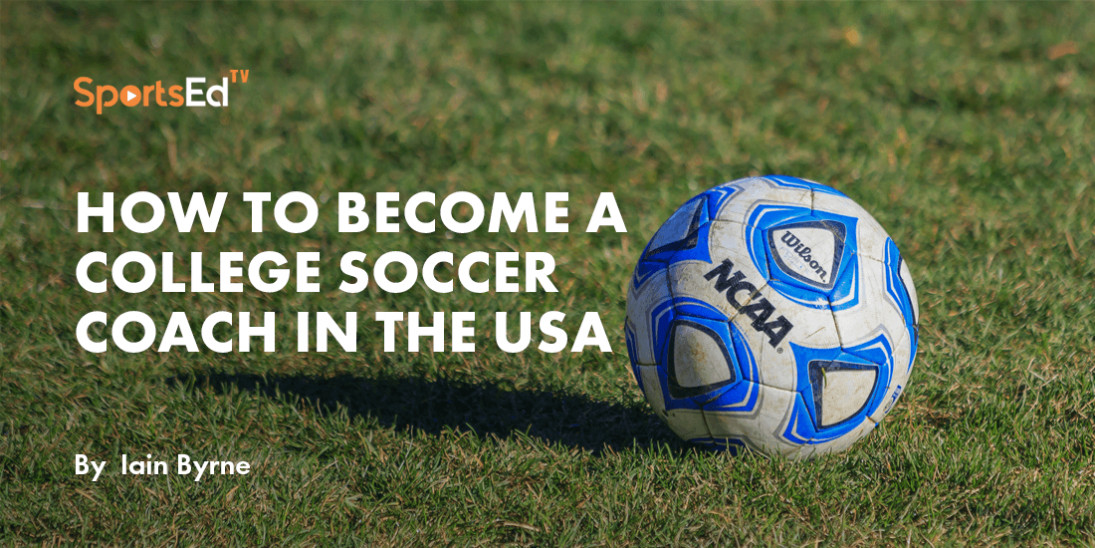 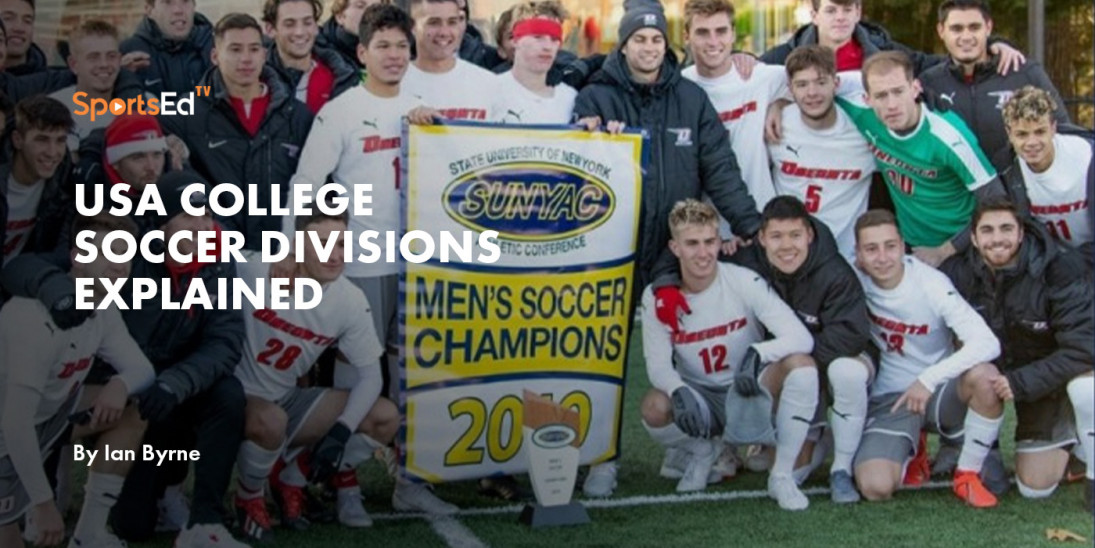 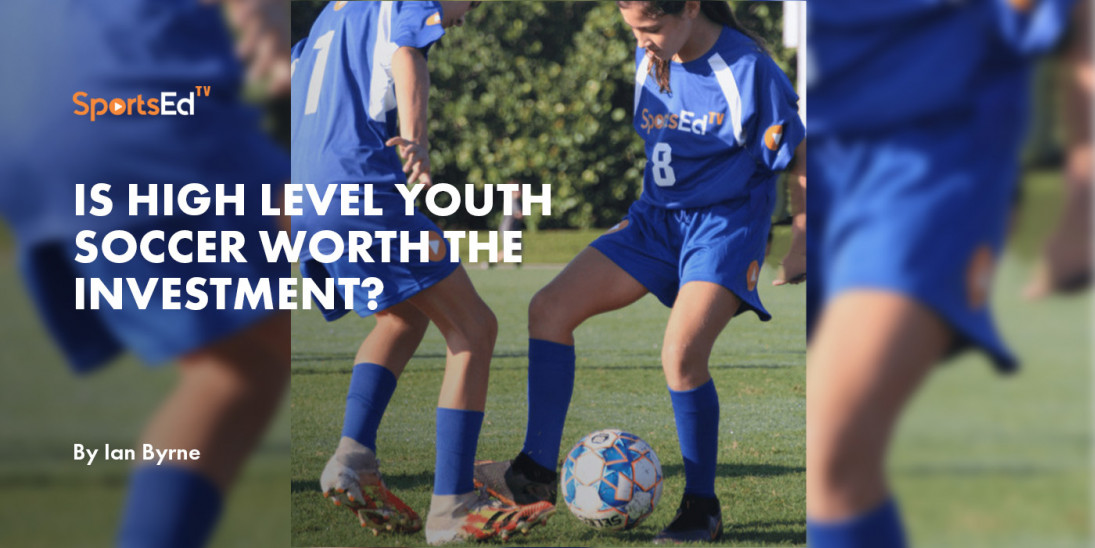 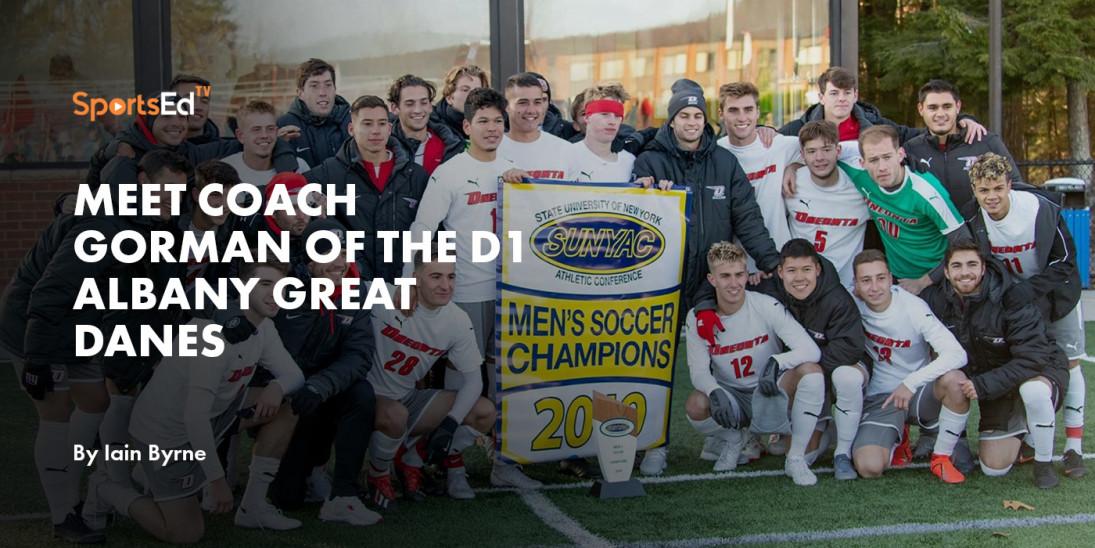 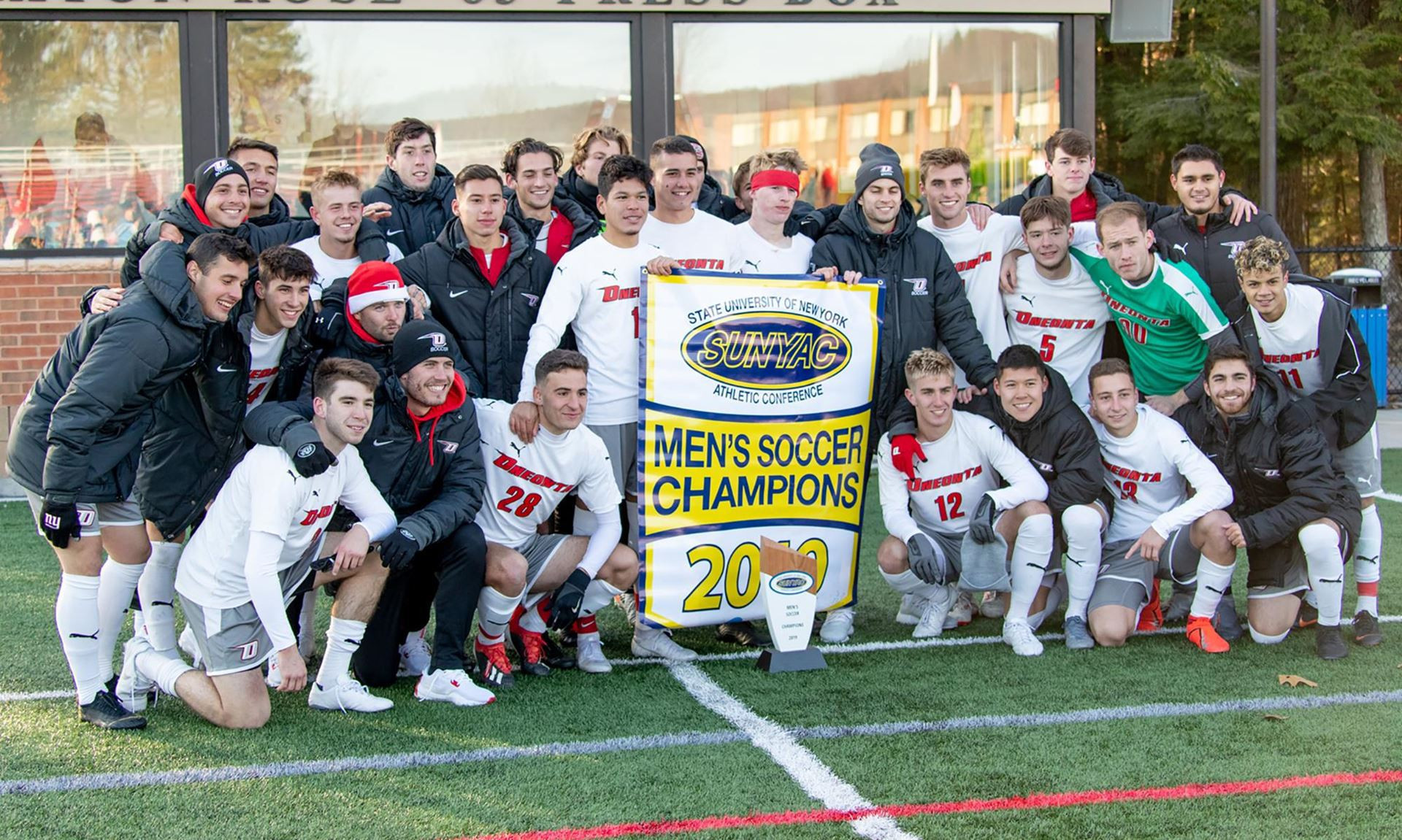