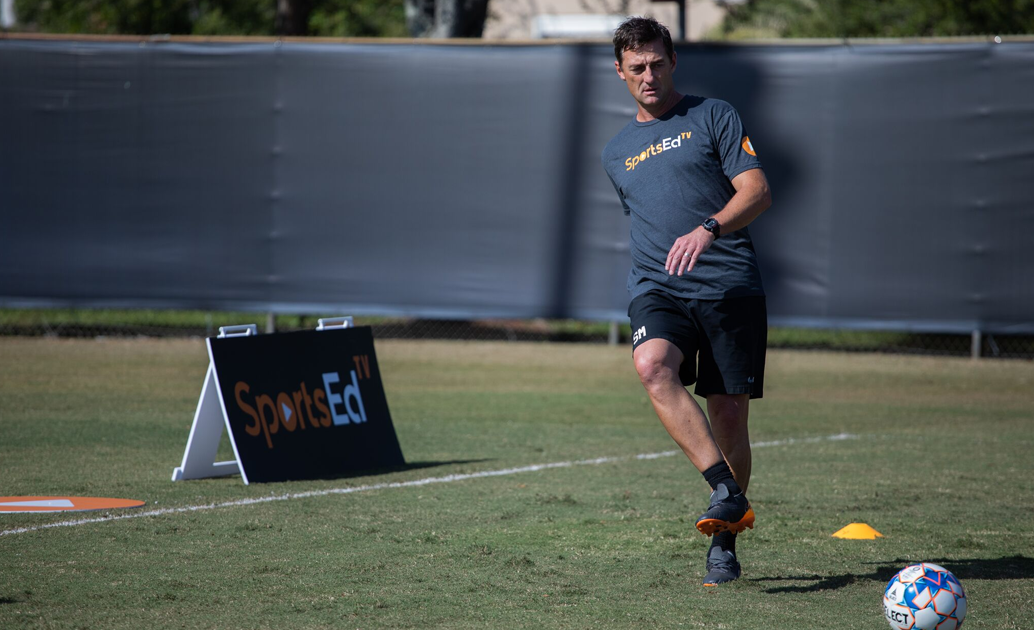 Steve McCrath just completed his twenty-first season at the helm of Barry University's men’s soccer program. McCrath has compiled an impressive 228-114-37 record to make him the winningest coach in Barry history and the third-winningest active coach in the Sunshine State Conference with a .650 percentage. McCrath has been named Sunshine State Conference Coach of the Year four times during his tenure with the Buccaneers in 1998, 2000, 2002, and his latest coming in 2010. He's also been named NSCAA South Region Coach of the Year, coming in back-to-back seasons during the 1999 and 2000 campaigns. In 2018, he, along with assistant coach Ali Simmons, keeper coach Brian Galvin and student assistant Maria Zamora were amed the South Region and National coaching staff of the year by United Soccer Coaches. McCrath led the Bucs to the pinnacle of NCAA Division II soccer in 2018, winning the program's first national championship. The Bucs pounded #10 Spring Hill 4-1, advanced in a shootout over #22 Lynn after a scoreless draw to win the South Region championship and advance to the quarterfinals, beat #8 Lander 2-1 to earn a trip to the 2018 Fall Sports Festival. At the Festival, they drew again with #11 Fort Hays State and advanced in the shootout then knocked off #23 West Chester 2-1 to claim the national title. Flavio Colasanti was named the SSC Player and Offensive Player of the Year. Francisco Greco earned the conference Freshman of the Year. They were joined on the All-SSC team by keeper Marco Sordi and defender Stephen Kosmala. Colasanti went on to claim an All-America award from both USC and D2SIDA, while Greco was recognized by D2SIDA. Kosmala was named the Most Outstanding Defensive Player at the national tournament, while Greco earned the Most Outstanding Offensive Player.

With eight appearances in the NCAA Tournament including three straight from 2009-‘11, the Bucs are no strangers on the NSCAA national poll. Since 1992, Barry has ranked in the Top 20 14 times. Since his first season in 1998, McCrath has led his team to eight NCAA Tournament appearances. In 1999 and 2000, the Bucs were selected to host the NCAA National Finals and finished runner-up to Cal State- Dominguez Hills in 2000 after a four overtime loss.

The Bucs posted undefeated seasons at Buccaneer Field in 2001, 2003 and 2011, winning 11 matches at home in 2003 to establish the school record. Overall in the friendly confines, McCrath has a 117-49-14 mark for a .689 winning percentage. Several players who have played under McCrath have gone on to play professionally, including Marco Velez, Marcina, Mark Anderson, Jacobi Goodfellow, Andy Hylton, Greg Jehs, Devala Gorrick, Alonso Alamo, Andres Perez, Alex Chorinos and Jon Samford. McCrath came to Barry from Seattle Pacific University, where he served as an assistant to his father, Cliff McCrath, from 1995-97. The elder McCrath is the winningest coach in NCAA Division II men’s soccer history with 597 victories, and guided the Falcons to five NCAA Division II titles. A highly-decorated player and coach, the younger McCrath was a four-year letterman at Seattle Pacific. He helped the Falcons to the 1986 NCAA Division II national championship and was captain of the 1989 squad. As a senior, he earned First-Team NCAA Division II All-Far West Region honors. He played professional soccer with the Seattle Storm of the Western Soccer League and later with the indoor Milwaukee Wave of the National Professional Soccer League. He finished his professional career with the Everett Bigfoot in the U.S.I.S.L. Division III. In 1993, he anchored the Murphy’s Pub defense for the U.S. Men’s Amateur national cup champions. McCrath also toured with Athletes-in-Action to South Africa in 1996. After graduating from SPU, McCrath became an assistant coach at Pacific Lutheran University prior to becoming the head coach at Inglemoor High in the Seattle area, where he was named 1992 King County High School Coach of theYear.

McCrath, who holds an "A" coaching license from the United States Soccer Federation and an NSCAA premier license, has also served as a coach for Washington’s Olympic Development Program for five years. In 2011, McCrath also earned a Master Coach Diploma from the NSCAA. In addition, McCrath is the co-coaching director and administrator of Northwest Soccer Camp, one of the nation’s most successful summer soccer camps, in Seattle. He earned his bachelor’s degree from Seattle Pacific in communications in 1990 and received a master’s degree in physical education with a concentration in sports administration in 1993, also from SPU. McCrath married former Barry assistant volleyball coach, Katie McCrath (née Ralph) in June of 2009 and lives in Sunny Isles, Fla. They have a son, Kieran and a daughter, Sienna.