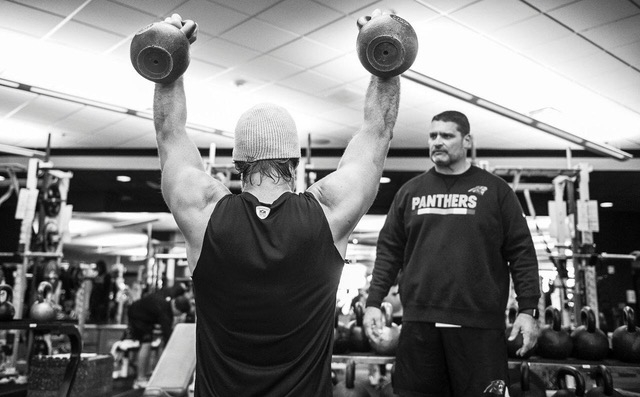 A 30+ year coaching veteran on the Private, High School, College, and Professional level, Joe Kenn is a proven leader in the field of athletic performance. His highlight achievement, voted on by his peers, was being named the 2015 NFL Strength and Conditioning Coach of the Year.

Coach Kenn is presently the Vice President of Performance Education for Dynamic Fitness and Strength based in Eau Claire, Wisconsin (http://www.mydynamicfitness.com). Coach Kenn’s role includes overseeing the educational content that is created for the site, as well as being a brand ambassador for the company.

Recently, Coach Kenn completed a nine-year stint at the NFL’s Carolina Panthers. During his time, the Panthers earned three consecutive NFC South titles, four play-off appearances, a NFC Conference Championship, and a place in Super Bowl 50. He coached 33 Pro Bowlers and 14 AP All Pro athletes during his stay in Carolina.

Coach is a highly sought-after speaker and has published numerous materials. His book, The Coach’s Strength Training Playbook (Coaches Choice) is one of the most popular books worldwide in the field of strength and conditioning. Coach Kenn has authored 2 eBooks, Push, Jump, Punch A Developmental Process for Teaching the Power Clean to Athletes (HARD COPY) and The Coach’s Strength Training Playbook for Football. He is recognized for developing the Tier System Strength Training program as well as the Block Zero Concept, the pre cursor for Long Term Athletic Development.

Coach Kenn and his wife Angela are co-owners of Big House Power Competitive Athletic Training (http://www.bighousepower.com). A web based company designed as an educational outpost for coaches and athletes. Coach Kenn also does consulting and hosts clinics from his private facility in Clemmons, NC.

Coach Kenn has led the strength and conditioning departments of Boise State University, University of Utah, and Arizona State University. He has been responsible with overseeing the athletic development of over 30 different sports. Before specializing in football, Coach Kenn spent his early years working with numerous Women’s sports. He has also worked at Pine Crest Preparatory School, Wake Forest University, University of Louisville, and Big House Power Competitive Athletic Training. Coach Kenn has competed in powerlifting, strongman, and highland games.