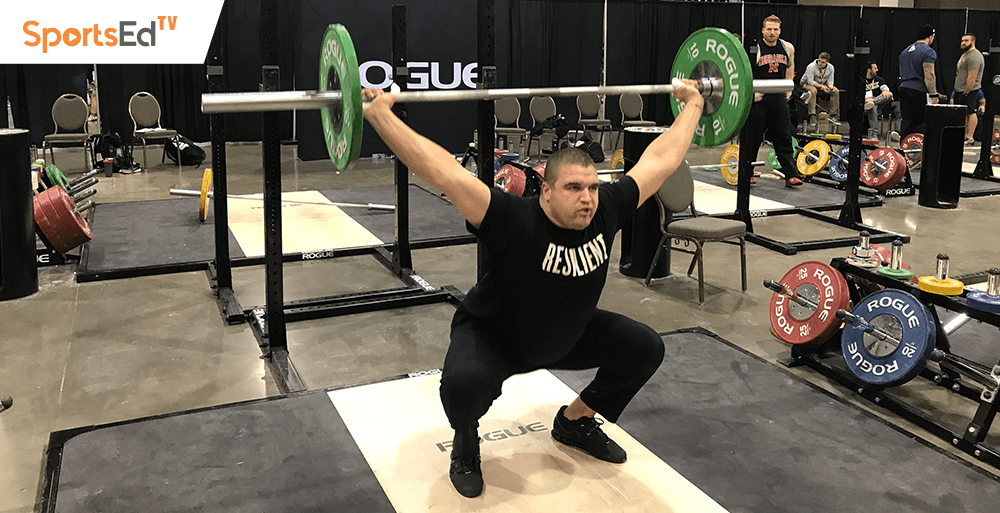 The Warm-up Room: Through the Eyes of an Athlete - TJ Greenstone

The day is finally here! If it’s your first meet, there will be a lot of “firsts.” Even if it’s a local meet, and you’re a seasoned veteran, you’ll likely still encounter some “firsts.”

Plan to arrive at the meet site several hours prior to your competition time. What to do next? I always like to survey the facility. Walk around it. Get to know where things are: the competition platform, weigh-in station, the warm-up area, any other surrounding area for extended warm-up you might need, the restroom, a concessions stand, or place to get food or drinks, and even the training hall. If you survey everything it will cut down on the panic of trying to find something when you need it. You simply just go.

First things first. When you have a good coach, your job is easy on lift day: show up and make lifts. Missing warm-up attempts is anything but ideal, however, it happens and it has happened to me. At my first meet, I showed up alone and completed my entire warm-up in the given 10-minute time slot only to find out I had about 18 attempts before my opener. Yikes! Show up with a great coach, makes lifts, and worry about nothing else.

Many countries have more of a dictatorship type coach-athlete relationship, where the coach chooses the athlete’s warm-ups and attempts. In the United States, it is often more athlete determined. You should have put together your warm-up attempts, and even possibly have run through them within that week to get the feel for the incremental jumps needed. Early in my career, I would work up to my last warm-up three days out from the competition (Wednesday for a Saturday meet). That usually would be my last true training day.

I like to get something to eat and find a quiet place to relax and “check out” between weigh-in and competition. This is a good time to mentally visualize warm-up and platform attempts. Perfect lifts, over and over again. At this point, you should have an idea of your preferred warm-up platform location.

Once clean and jerks are underway in the session prior to mine I put my things near that platform. Be willing to share a warm-up platform. Be focused yet flexible. Focus on the main task, but understand that many unpredictable things are likely to occur. Be flexible when something occurs that is not ideal; it shouldn’t shake you.

Locate a chair. Once you start lifting, your choices are to lift or sit. Hopefully, you have loaders so you can save energy for lifting. I keep water close by, as I like to sip between attempts as well. I prefer to be somewhat close to the restroom also because I often overhydrate leading up to a meet.

Know your warm-up attempts and the order of opening attempts. A coach should take care of this as your only job as an athlete is to make lifts. Warm-up preferences vary, with some foam rolling for five minutes, others for 45 minutes. Others touch their toes a time or two and then grab the barbell.

I prefer to roll out and get worked on by my team medical staff, if at a larger meet. Given my athletic background, I’m used to a conventional dynamic warm-up, usually wearing multiple layers to increase body temperature and blood flow to my muscles. This usually takes me about 10-20 minutes in total.

Ignore what is going on around you, keeping the focus on the barbell and your coach. Otherwise, there’s no telling what you will see. Crazy partner stretches, screaming and grunting, absolutely awful form, unnecessarily loaded barbell complexes, etc.

As an aside, I’m a firm believer that all you do is snatch and jerk on meet day. It is not the time for any technique drills or pull complexes. The hay is in the barn. Outside of some barbell work to warm-up, be specific in the message you relay to your mind and body with your warm-up.

Thank the people who helped you along the way. In 2015 I flew 1,500 miles to compete at the University National Championships, without a coach. About two hours prior to lifting I was connected with someone whom I had never even had a conversation. Luckily, he was more than qualified and Doug Lane coached me to a first-place finish.

Thank the officials, the marshals, the loaders, etc. Just be a good person. Don’t be arrogant. Be grateful that you get a chance to compete in an amazing sport with great history where many have come before you and many will come after.

(TJ Greenstone is the 2018 American Open +109Kg Champion, and a strength coach at Butler University)

The Warm-up Room: Through the Eyes of a Coach - Harvey Newton

OK, the lifter made it through weigh-in without a problem. Coach and athlete now have between an hour and nearly two hours (depending on when the lifter weighed in) before the first lift. What to do?

Depending on how much time is available, many lifters, particularly those who cut weight, need and want to eat. Depending on the surrounding environment, it may be possible to slip away, eat (or at least order food), and return in plenty of time. But, anticipate problems that could occur (flat tire, slow service, getting lost, etc.) and minimize the challenge. It’s often best to have food along for after the weigh-in and not have to leave the competition venue (but it’s a good idea to eat away from the actual lifting).

Once the lifter has eaten, dressed, and become familiar with the warm-up room, it’s a good idea to have a lifter turn over to the coach any valuables (money, wallet, passport, etc.). Especially at local meets, it’s not unknown to have opportunists pass through the warm-up room and rifle through gym bags while a coach and lifter are at the platform.

Successful warm-up room performances set the way for greater success on the competition platform. Similarly, challenges such as missed, rushed, or skipped lifts, confusion on the part of the coach, or other similar scenarios may lead to disastrous platform performance.

Coaches should consider which platform to utilize for warm-ups. This may involve cooperation with other coaches and lifters. Consider ahead of time the relative differences in performances between lifters sharing a platform. Tempers may flare when there’s a last-minute rush to change weights (reducing from 120kg to 70kg, for example) and take a lift.

There are occasionally some rather rude parties in the warm-up room, grabbing certain bars, taking discs to another platform, etc. Make sharing a platform a cooperative experience for all, in other words, also help the other guys load, etc.

Some coaches like to be near the entrance to the competition room, others prefer to be far away in a corner (much less traffic). Give consideration to the distance a coach may need to travel to the marshals’ table to determine the weight on the bar, attempts remaining, etc. Also, if the chosen platform is across the room, know how to quickly communicate with a lifter if he/she needs to speed things up (or has been called for an attempt).

Tentative first attempts are recorded at the weigh-in. Coaches need to know as soon as possible where a lifter is in terms of attempts before he/she goes out. Check the session score sheet, usually at the marshal’s table. Try to minimize traffic around the announcer’s table.

In today’s sport, too many new coaches utilize the rule that allows for two changes between each attempt. With the 1-kilogram progression in effect, this really doesn’t serve much purpose. I see few, if any, leading international coaches use this strategy except at the end of the competition when an extra kilo or two makes a difference.

A good coach is aware of what’s going on in this regard. A total novice coach may be very confused by changes (appropriate, or a waste of effort) by other coaches. Experienced coaches are seldom affected, as they know others in the session, what the coaches are likely to do, and they build in some wiggle room so as not to either warm up too quickly or get caught flat-footed.

Some years ago, a national-level lifter asked me after weigh-in if I would “work” with him at a local meet. I knew the lifter, and although he was frequently a challenge, I agreed. Although his session started soon, he left the venue in search of food. This was not a major concern as he planned to start heavier than most of his competitors.

I watched the weights continually increase, but there still was no sign of the guy (before cell phones). He finally strolled into the gym about 12 attempts before his opener. Needless to say, he dressed quickly, and warmed up at a very rapid pace. He was breathing hard and pretty distracted when his name was called for his opener. But, he went on to make all of his snatches and all of his jerks. This was a guy better known for missing all six attempts.

Had I truly been his coach, or if this had been a big event, I would have been concerned. As it was, I just chuckled at his performance.

It’s not unusual to have new coaches and/or novice lifters perform many more warm-up attempts than are truly necessary to be properly warmed up. After a general warm-up it makes sense to plan six to eight warm-ups in the snatch over about 15 minutes before the first platform attempt. Four to six C&J warm-ups normally suffice. Save energy for the platform.

I’ve always viewed a lifter’s first platform attempt to actually be their last warm-up attempt (very little pressure). There are no medals awarded for the weight with which one opens, only for the final results. Put the pressure on the competition, mostly by making successful lifts.

Once a lifter has finished their final attempt coaches should initiate a routine allowing him/her to gather their gear, chat with friends/family, send tweets, etc. At a national or international meet know the status of anti-doping controls and appropriate protocols, including media interviews and/or the awards ceremony. Coaches of athletes chosen for doping controls need to accompany them through the process.

It is not unheard of, time permitting and based on the value of the meet and the lifter’s performance, to have developing lifters perform some training sets. This may also be a good time to drive home some technical issues and work a drill or two. Just do this in a way as to not interfere with others.

TJ Greenstone, Weightlifting Coach, SportsEdTV Contributor At Butler University TJ Greenstone is an assistant strength & conditioning coach, along with serving as an adjunct professor. He received his bachelor’s degree from Vanderbilt
Share This Story, Choose Your Platform!