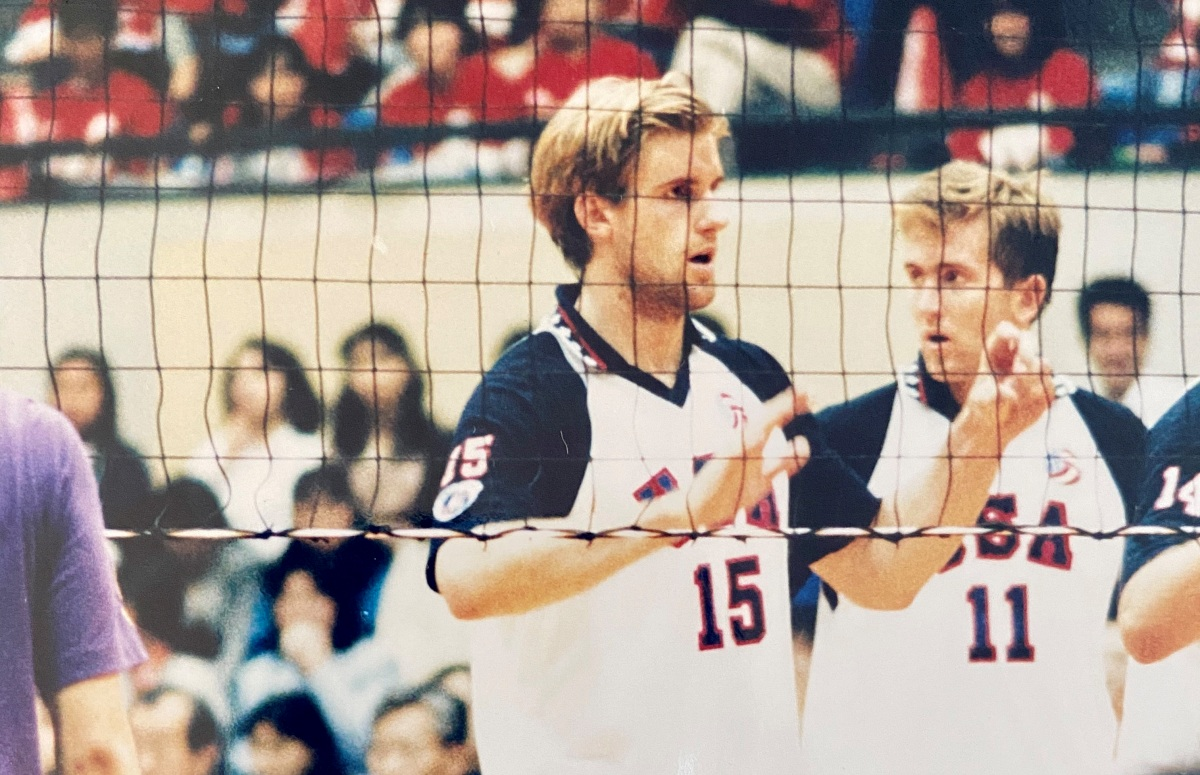 I grew up in Tulsa, Oklahoma in the 1970s and 80s playing a wide variety of sports. In elementary school, I played soccer. In middle school, I played basketball.  In high school, I wrestled as a freshman in the 145 lbs weight class at 6’1.

I got into Taekwondo my sophomore year (and managed to break my nose against my instructor’s foot), and I played football as a junior (in the offensive tackle position at 6’5 and about 160 lbs – not a perfect fit…). While I did well enough in each sport I tried, none of them had really been a great fit for me.

So, by my senior year in high school, I was searching for yet another sport to try. A friend of mine thought I had volleyball potential since I had grown to about 6’7 and knew of a junior boys’ volleyball club team in Tulsa coached by the volleyball legend, Peggy McCaw, called “Stufffit”.

Even if Tulsa was no “hotbed” for volleyball (volleyball wasn’t even a sanctioned sport for boys in high school), Stufffit had achieved unusual success for a midwestern team.  I was happy to give it a try, but just starting to learn how to play the sport my senior year in high school, I had no real expectations for volleyball, other than trying it out as a potential fun pastime.

The Stufffit team practiced in what can only be described as an oversized aluminum shack at the Tulsa Westside YMCA.  Without air conditioning, the shack was brutal in the summer months, but at least it was easy to warm up.  It was there in that aluminum shack that Peggy took me under her wing and determined to at least teach me how to hit and block in the middle blocker position.  She had her work cut out for her - I was tall and excited to learn, but that was about it.

The team had high level players, such as Chip McCaw (Peggy’s son), Scott Larkin, Darrell Pearson and Eric Kirk. We were also fortunate to have former Stufffit players, like Craig Geibel and David Frette who had gone on to play in college (they were both top players at Ohio State), practice with us when they were back in town during their breaks.  Peggy’s daughter, Missy, who went on to become a volleyball college star, also practiced with us. Needless to say, I was given an incredible opportunity to learn to play with a great coach and high-level players to practice with.

Volleyball really clicked with me, unlike any sport before. The game’s mix of power and finesse excited me. It was hard to match the feeling of “roofing” the other team with a block or bouncing a quick set inside the ten-foot line. I also became a fan of the game, and Peggy would loan me tapes of the 1984 and 1988 Olympics so I could study the techniques of players like Karch Kiraly, Craig Buck and Steve Timmons.

It wasn’t easy, however, and there were a lot of challenges in trying to learn the game quickly and catch up with the high-level players around me.  Not only was I learning the rules of the game, but it took a huge effort and a lot of reps to pick up the techniques and systems.

I still remember Peggy teaching me how to hit - how the approach footwork was done, and how to get the most power out of the arm swing. She’d tell me to rotate my torso sideways and cock my hitting arm back with the other arm out in front, almost as if I was about to shoot an arrow with a bow fully drawn.  Then, explode and focus on the speed of the arm, thinking of it as a whip, while using the energy of your entire body to hit the ball.

There were setbacks too. Soon after I started playing, I broke my left hand when I fell down during a warmup and had to wear a cast for about a month and a half. I didn’t have time to spare, so I kept practicing with the cast on my hand.  I’m right-handed, so I could still practice hitting, but for years after Chip would complain that when he was setting for me, I’d spray sweat out of my cast and splatter him as I approached for a quick set.

Yet, eventually the cast came off, and in a matter of months, I would learn the basics of the middle blocker position. In the summer after graduating from high school in 1990 and less than a year after I had started playing volleyball, I found myself on a team that placed fifth out of around 60 teams at Nationals.

I soon after received a scholarship offer to play at BYU.  Things happened very fast - just a month or so prior as I was graduating from high school, I had had no plans to play volleyball anywhere other than on a club team in Tulsa for fun. But, accepting a scholarship at a great school like BYU and taking up the opportunity to play volleyball at even higher levels was a no brainer.

During the next decade from 1990 to 2000, I played volleyball at BYU for the great Carl McGown, joined the U.S. National Team and traveled the world playing other countries’ national teams, made the U.S. Olympic team for the Olympic Games in Atlanta, GA in 1996, and played professionally in Italy for several seasons.

Through volleyball, I attended an excellent college, traveled the world, formed lifelong friendships and met my wife. Needless to say, that decade was filled with some of the most amazing experiences of my life, all made possible through volleyball.

I hope my story as a late starter with volleyball inspires someone who may have otherwise thought it was too late for him or her to pick up volleyball and take the sport to the highest levels.  No matter where you take volleyball, I’ll bet incredible life experiences await. And, I can assure you, it’s never too late.

Ethan Watts Ethan Watts collegiate and international volleyball standout was a member of United States Nation Team which competed in the 1996 Atlanta Olympics.
Share This Story, Choose Your Platform!