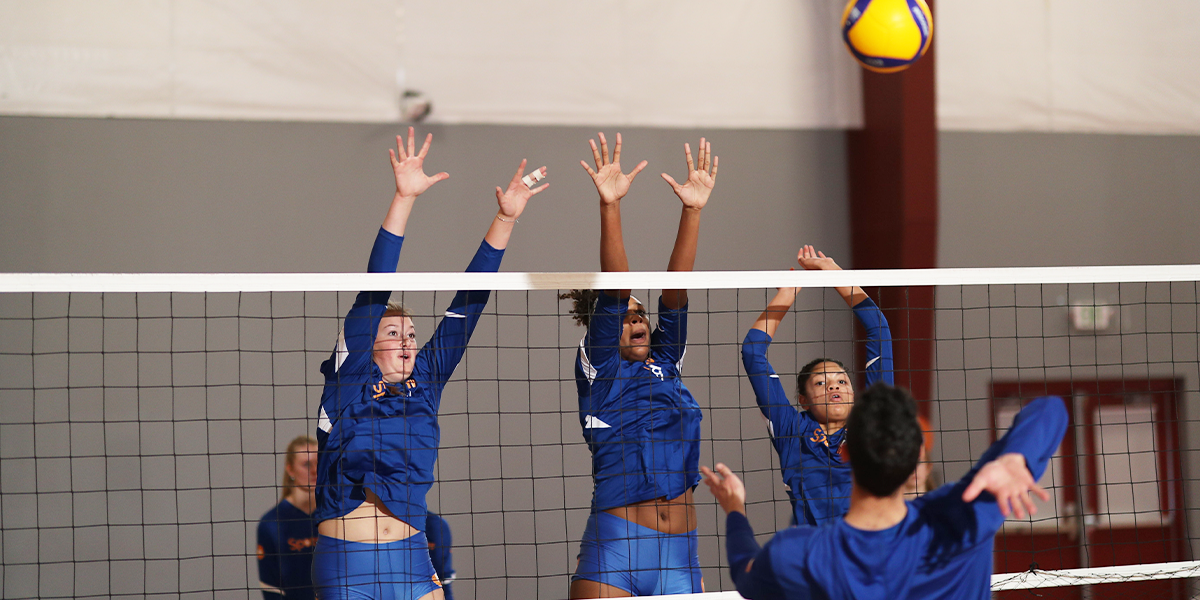 The NCAA 2019 volleyball tournament was one of the most competitive and it demonstrated a high attendance rate of spectators and an outstanding viewership from Television and social media. One of the most significant skills in the tournament was the attack. The purpose of this article is to analyze the bedrock foundation of attacking focusing on its efficiency throughout the tournament in 2019 and technical development process. Although attacking relates to many movement forms, we will discuss some key elements of spike as a complex movement pattern and a critical skill in the game of volleyball. The spike is the focus of this reflection aiming to:

The percentage of kills or kills efficiency is a common measurement among volleyball coaches and athletes. Figure 1 reveals the results of the percentage of kills of the top five teams in Division I of the 2019 season. The data were organized through the won matches versus the lost matches from the Volleymetrics® evaluation system.

Figure 1.  Percentage of kills of the top five teams in Division I of the 2019 season.

These results suggest that the winning teams performed above 40%, except for the University of Minnesota team. This parameter of 40% of kills seems to be enough for the teams to win their matches. In fact, all the teams that lost their matches did not reach 38% of kills. Therefore, we would like to suggest 40% of kills as a goal to be setting for teams to win in Division I. If the 40% is the outcome, what would be the technical parameters that players should demonstrate to reach this outcome and to go beyond? The answer is simple.  Volleyball professionals must analyze their criteria of observation and the process of performing the attack amidst such a competitive environment. We would like to highlight key elements that coaches, and athletes should observe in order to achieve higher levels of performance. We strongly believe these should be the focus of coaches in their training to make sure their attackers improve technically as a performance indicator of expertise and perform better under pressure.

In Figure 2 below, some illustrations of the key points that should be avoided when performing the spike technique in volleyball are represented. The main reason we are addressing what to be “avoided” relies heavily on the fact that in the United States what college players’ do is a reflection of what they were taught throughout the volleyball long-term athletes’ development. Considering that the U.S. is such a continental country, we understand that there are many ways to teach but some elements require correction and deserve our attention as sports educators. Three main aspects were divided into the spike phases and highlighted by areas of analysis.

Figure 2.  Illustrations biomechanics’ of some key points to avoid in spike technique.

The first aspect related to the lower limbs (footwork) should be avoided is the short adjust step. The length of the first step should be slow and short (but not too short as demonstrated in the picture above) and the step-close should be wider and explosive. These parameters allow the hitters to better adjust his/her timing to the set as well as to maximize a balanced spike that optimize the horizontal speed into a higher vertical jump (i.e., takeoff). Mainly, for the outside hitters, the step-close (approach phase) should be of some amplitude for better use of the ground. Likewise, a short arm swing should be avoided (e.g., chicken wing versus full pendulum). On the other hand, a wider swing should be achieved (Da Matta, 2004; 2015).

The second aspect within the preparation and contact phases, the arm opposite the hit to the ball should be aimed like an arrow. Observe on figure 2 that the non-hitting arm is lose downwards. This is not ideal because it changes the gravity center leading into unbalance landing (Reeser et al., 2010; Taylor et al., 2019). The non-hitting arm should be adopted in this phase as a guiding arm as a reference aiming towards the ball to lead the hitting arm with a precise distance, timing, and accuracy. The next area of observation for coaches and athletes shows that same arm loose at the same spot without any efficient movement function. In the synergy of the attacking, this arm should be adjusted closer and/or behind the trunk to counterbalance with the hitting arm fully extended forward (Da Matta, 2004; 2015).

Finally, the third aspect is the landing phase. During this phase, landing on one foot should be avoided. There is strong evidence that consistent one-leg landing could lead to injuries on the knee, hip and lower back (Taylor et al., 2019). Thus, the observance of all of these key factors should improve the efficiency of the spike.

These tips are guidelines acquired through our systematic research and also coaching experience in collegiate athletics, the professional teams in international volleyball expertise development in Brazil. These tips we would like to share with the community that follows the SportsEdTV because this information is valid, reliable, and congruent with the practitioners and scientific literature. We encourage coaches and athletes to reflect upon these key elements. There is always something to improve the clinical eye and we as practitioners need to think effectively how to apply these concepts.

Perform a spike sequence by repeating just one target and then immediately use another target represented by figure 3 (e.g., hit straight, hit line, and sharp cross angle) for initial learning levels. For intermediate levels, perform a sequence of three different targets (e.g., hit straight, offline, seam, deep cross, cut shots depict by the black arrow, and roll shots in figure 3). Finally, for the advanced level, block out, shots off the block, tooling the block's outside hands and returning to own team. Please see our blog on Motor Learning (Dutra & Da Matta, 2020). Players must acquire competence to hit at all the different targets shown in figure 3. The concept now is to apply these in a game situation (6 on 6) to make better decisions as well as result in better technical performance.

Figure 3.  Different targets that outside hitters should be able to perform.

These concepts are applicable to all other specialized attacking positions such as the right-side player and the middle hitter, of course, respecting their specific roles (i.e., attack angles and types of sets) and functions in the game. Our sincere thanks to the Athletic Performance Laboratory of Nebraska (NAPL) at the University of Nebraska for offering us conditions to collect data and represent the culture of American volleyball.