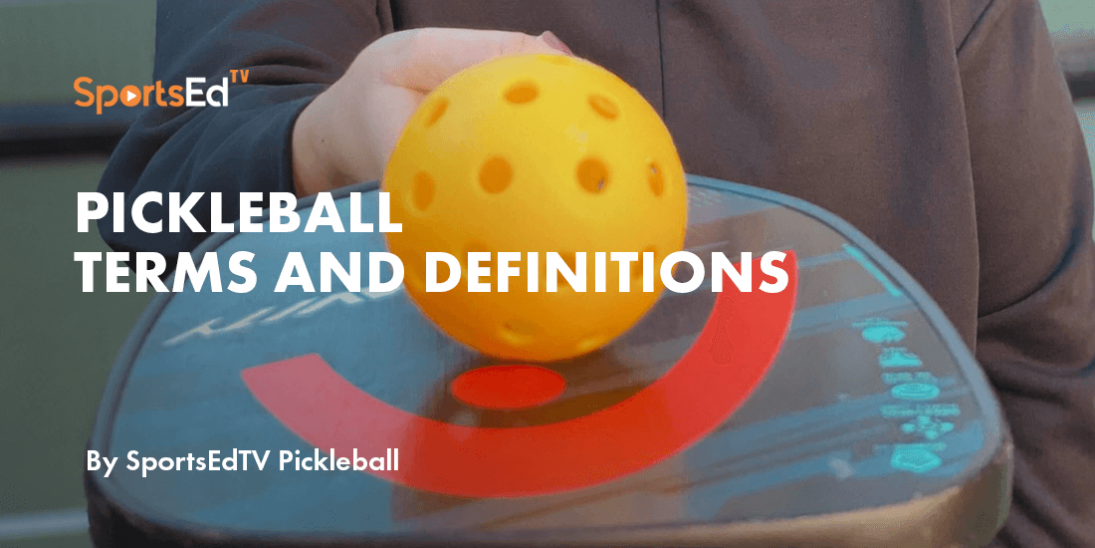 Webster defines thesaurus as words or information about a particular field or set of concepts.

Our Pickleball Thesaurus is meant to offer an easy reference to terms and lingo in the fastest growing sport we know.

Perhaps because Pickleball’s meteoric growth holds a mirror to our own, we understand the nuance of learning new ways to communicate, compete and play.

So Pickleball newbies and curious, below is the blending of several authoritative sources on the subject, in an alphabetized sequence presented with an emphasis on simplicity. 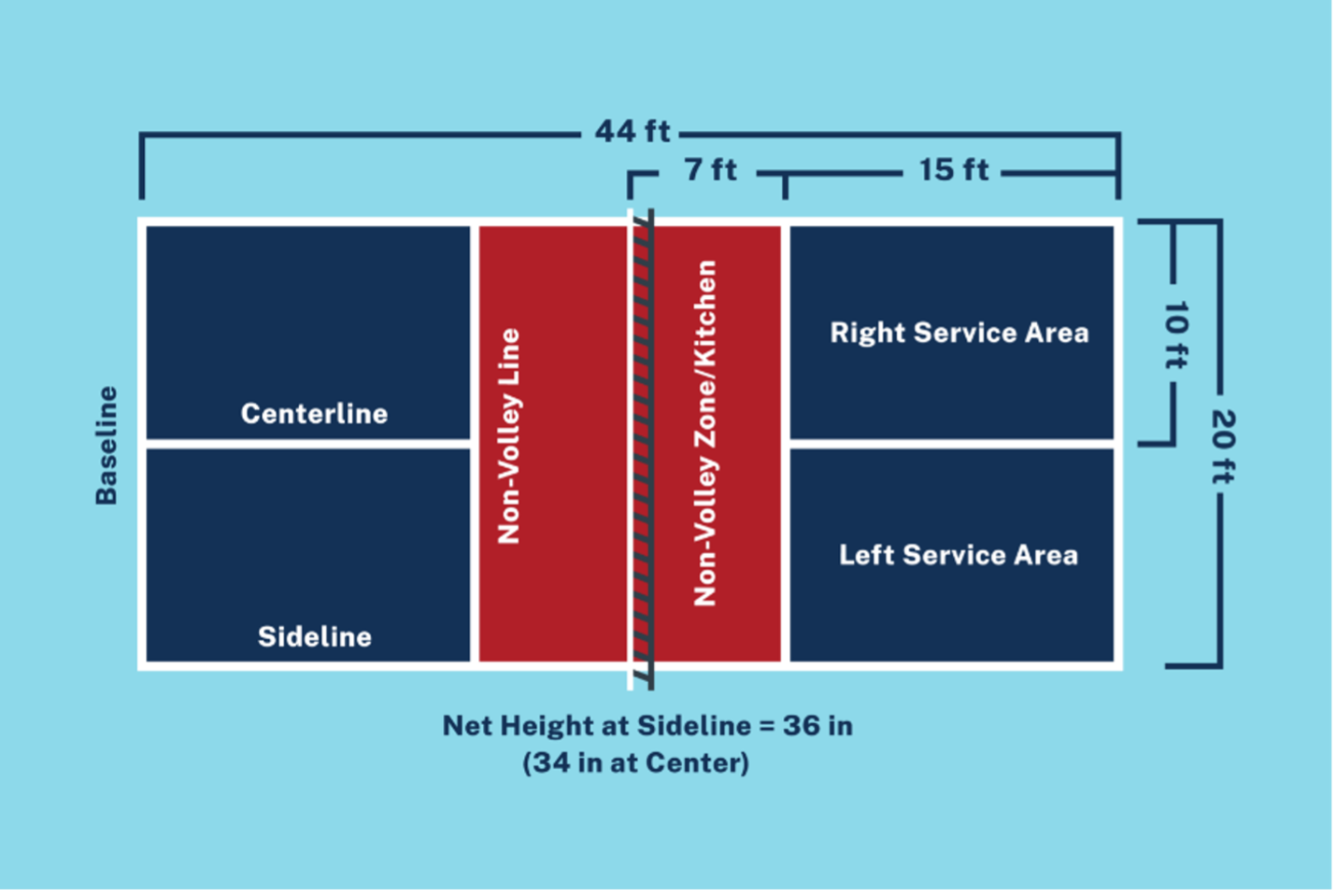 Ace – A legal serve in the accepted serving area and has not been touched by a receiver.

Approach Shot – Played while moving forward and toward the net.

Around the Post – Often made playing a wide dink, this shot travels around the net post and usually lands near the opposite backcourt line.

Backhand – A cross-body swing made with the back of the hand and paddle leading the motion.

Backspin – a struck ball rotating backward through the air.  The strike is applied in a high to low arc.  Often called a cut or sliced shot.

Ball – Made of plastic, the Pickleball has holes resembling a whiffle ball.

Banger – Describes a way of playing.  A banger’s shots are hard and driving.

Baseline -- Generally 22 feet from the net, the baseline marks the back of the court.

“Bounce It" – A call from your playing partner to avoid striking an incoming shot that appears to be headed out of bounds.

Carry – Describes a stroke in which the ball tends to carry along the face of the paddle rather than immediately bouncing off of it.

Centerline – A line equally dividing the service court from the non-volley zone.

Chop – A downward stroke that applies backspin to the Pickleball.

Crosscourt – Is your opponent’s court, diagonally opposite from yours.

Crosscourt Dink – A soft shot that travels from one side of the court, over the net, to the other side, usually falling into the opponent’s non-volley zone or kitchen.

Dead Ball – Play stops after a fault is declared and resumes on the next service.

Dill Ball – A ball in play; a standard shot that has bounced once on the opponent's side.

Dink – A shot struck softly so it drops into the opponent’s non-volley zone and is often difficult to return.

Dinker – describes the style of play of a player who frequently hits soft shots.

Double Bounce Rule – Requirement to let the ball bounce twice on the serve and its return.

Double Hit – Occurs in a single groundstroke when the ball hits the paddle twice.

Doubles – Teams of two players in the competition.

Drive – Describing a low shot aimed at the backcourt of the opponent.

Drop in Play – take many forms.  All are intended as simple reservations to decide who plays next on a court.  It can be as simple as laying paddles down in a sequence of who is next to play.  Indoor pickleball facilities may have sign-up sheets.  One of the weaknesses of this system results in players of widely varying skill levels end up on the court together.

Drop Shot – Another soft shot that clears the net and falls short of the opposing players, usually in the non-volley zone.

Ejection – Prohibiting a player from further play in a tournament is often due to unacceptable behavior as determined by the tournament director.

Erne – A unique shot requiring agility that often occurs during a dinking rally.  An Erne happens when a ball is struck out of the air with the striker standing outside the inner part of the court and the other side of the sideline, parallel to the non-volley zone.

Falafel – Pickleball slang for a weak bounce off a paddle that doesn't go far.

Fault – The end of a rally caused by a rule violation.

First Serve – At the beginning of a new game, one partner from the first serving team is allowed to serve until after the first fault when the serve switches to the opposing team.

Flapjack – Pickleball slang for a shot that must bounce before being hit.

Forehand – The stroke made by leading the swing with the palm of the hand and front of the paddle adding energy to the strike.

Game – Most Pickleball games are played until one team accumulates 11 points, with a two-point margin.  Some tournaments play games of 15 or 21 points, again with a requisite two-point winning margin.

Grip -- Describes how the hand is placed on the handle of the paddle.  There are versions known as the continental, western and eastern grips.

Groundstroke – Usually struck from the back of the court, a groundstroke is a shot that is executed following the required ball bounce or bounces.

Half Volley – This is a scoop-like stroke where the player strikes the ball shortly after the bounce.

Hinder – Play that is affected by any elemental occurrence.

Junior Player – Pickleball competitors between 7 and 19, as determined by the USA Pickleball Association

“Kitchen” – Is Pickleball slang for the non-volley zone, often attributed to the ease of pronunciation as compared to its official designation, especially in dynamic play.

Ladder—This is a graphical depiction of players' names in an event or league showing their win/loss progress in the events scoring system.

Line Call – Called when the ball lands in or out of the lines.

Lob – A shot forcing the opponent to the baseline, shaped high and deep. 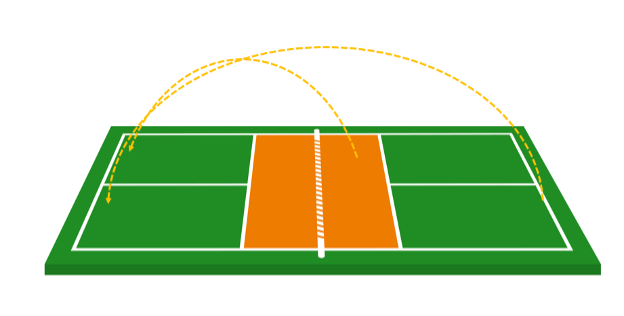 Match – Games in a series that determine a winner.  Tournaments usually consist of a series of matches.

Mid-Court – The area between the No-Volley-Zone and the backcourt, is often called "no man's land."

“Nice Setup” – A Pickleball compliment for play that moves an opponent, leaving an exposed section encouraging a point score.

“Nice Get” – Another Pickleball compliment for returning a ball difficult to reach.

“Nice Rally” – All players share the compliment after several shots between the teams.

Non-Volley Zone – Adjacent to the net, it measures seven feet deep and players, by rule are prohibited from volleying from it, although a player can be in it, but to hit the Pickleball it must have first bounced. In Pickleball slang it is known as "The Kitchen." 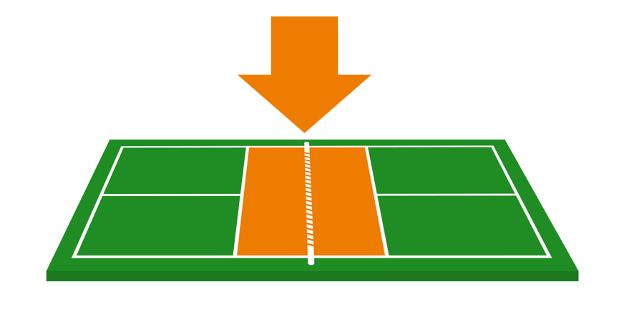 “Opa!” – An exclamation signifying that the requisite bounces have been met and the ball is now open to volleying.

Open Play – This is a first cousin of drop-in play.  All you simply need to do is find out where and when and then show up paddle in hand.  Some pickleball facilities divide court time between skill levels of players so checking first is suggested.

Overhead – Striking a Pickleball that is above the player’s head.

Paddle – The implement used to strike the Pickleball.  It is not called a racquet.

Check out our suggested HEAD paddles

Paddle Grip – This is the handle of the striking tool used in Pickleball.

Passing Shot – Aimed at a distance difficult for an opponent to reach, this volley or groundstroke is meant to prevent returns.

Permanent Object – Anything or anyone that is near or on the court that could interfere with play.

Pickled – A term designating that a team has lost and scored no points.

Plane of the Net – Vertical imaginary planes that go beyond the actual net on all sides.

Poach – During doubles play when a partner crosses into a teammate's side of the court to make a stroke.

Punch – A short, fast shot made with a minimal backswing, usually a volley stabbing the ball out of the air before it bounces.

Put Away – A hard sure shot with zero chance of a return.

Rally – A long series of shots between opposing players or teams.

Rally Scoring – A method of Pickleball scoring, considered non-standard in which all sides can earn a point.   The rally-winning team gets the point and then serves.

Rating – A level attained based on skill as determined by the USA Pickleball system.

Ready Position – An athletic stance designed for good returns.  Generally with the paddle in front of the body which is in balance and ready to react quickly.

Replay -- A rally that is repeated for any acceptable reason.

Retirement – When a player for any reason decides to stop the match and award a win to an opponent.

Round Robin Play  -- This Is a popular playing model for a group between 4 and 8 players in which partners are rotated by some form of random selection after each game.

Scramble -- In a scramble format, players compete in a division or bracket with other competitors of similar skill levels.

Second Serve – Two serving attempts are allocated to a doubles team.  When the first one fails, the partners switch and the other teammate serves the second try. If that fails, the service is awarded to the opposing team.

Serve – An underhand stroke that puts the ball in play and starts the point.  Also called Service.

Service Only Scoring – In formal Pickleball a player or team must be serving to record a point.  If the point is lost, the serve transfers to the opponent.

Server Number – Applied in doubles play, number 1 or number 2 is designated to the player depending on their team’s server sequence.

Sideline – The separator designating in and out of bounds at the side of the court.  The line itself is inbounds.

Side-Out – After losing the point on a serve the serving side relinquishes the serve to the opponent.

Singles – Two players compete one on each side of the net.

Skinny Singles – Two players, one on each side compete using half of the court with the centerline becoming a sideline.

Stacking -- A rule-allowed strategy that permits doubles teammates to play on the same side of the court and during play shift into a desired position.  Notably used by teams where players are left and right-handed.

Technical Foul – During tournament play, this is a penalty called by the referee.

Third Shot Drop – Often used on the third shot to slow the play and reset, allowing the serving team time to get near the non-volley zone area.

Topspin -- A Pickleball rotating in the direction of the intended flight, applied by a stroke with a low to high arc at contact is made.

Transition Zone – Refers to the court area between the baseline and the Non-Volley Line.

Unforced Error – When a shot fails when success is expected.

Verbal Warning -- In Pickleball sanctioned tournaments a referee’s verbal warning may be issued to each team per match for a list of infractions outlined in the rules. A second verbal warning triggers a Technical Foul which awards a point to the opponent.

Volley – A paddle strike on the Pickleball before it touches the ground.

“Volley Llama” – Slang for an illegal shot when a player hits the ball into the Non-Volley Zone.2 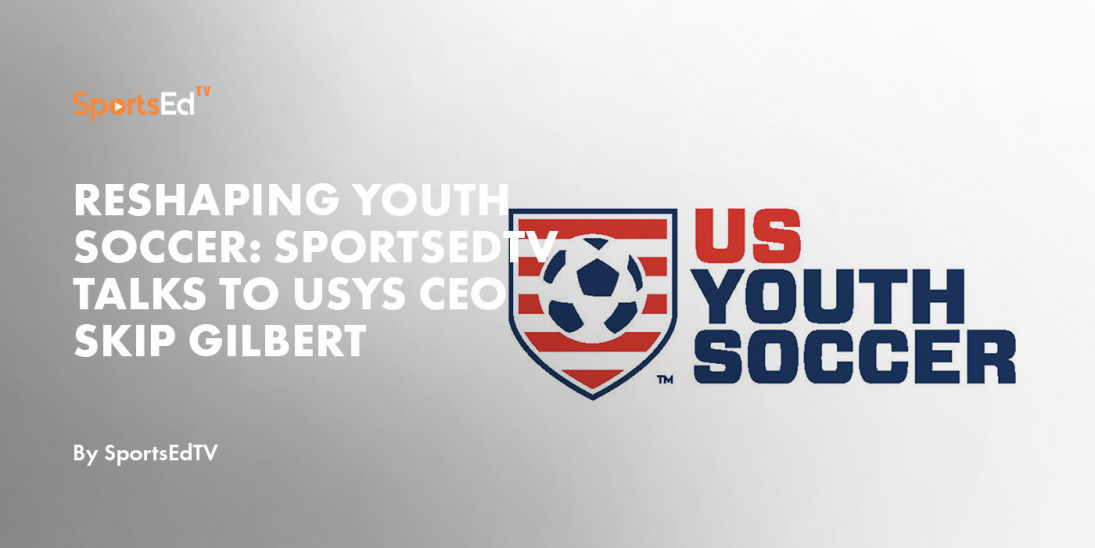 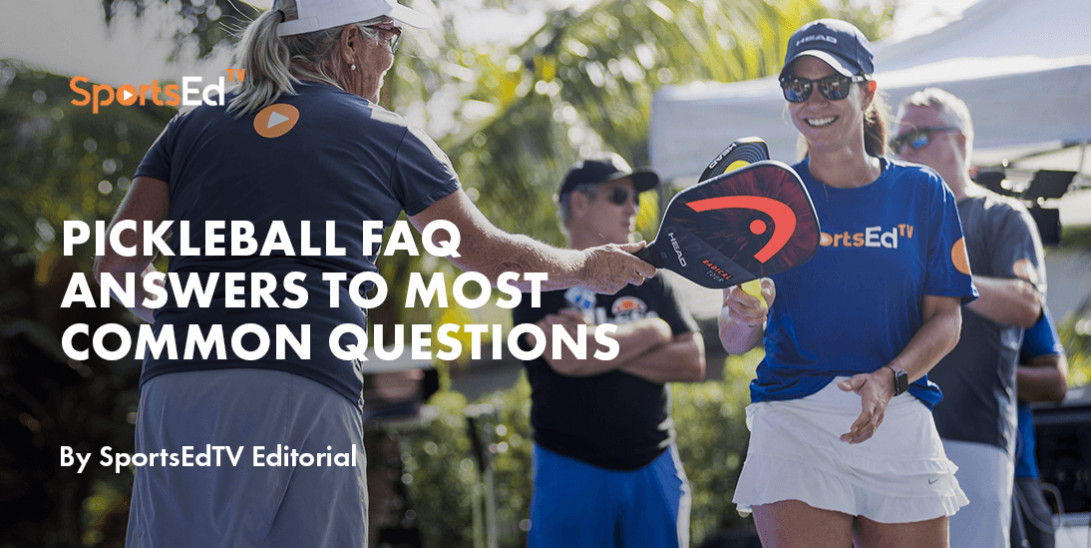 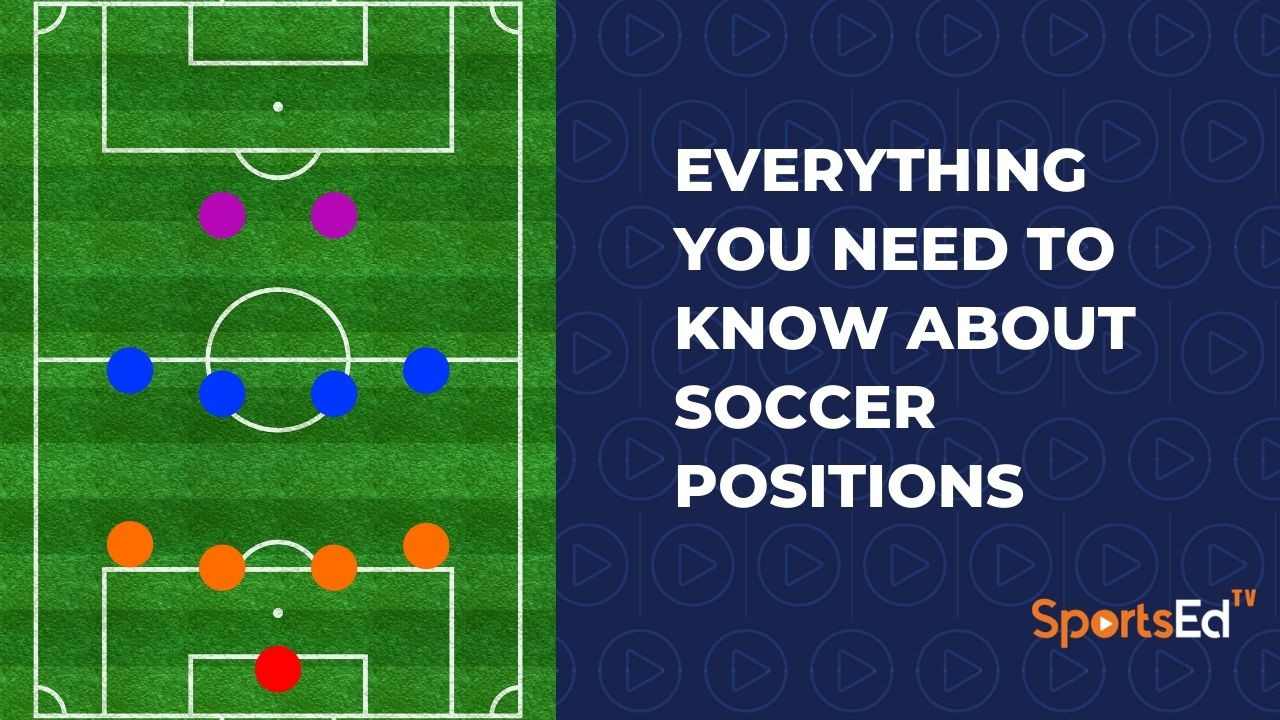 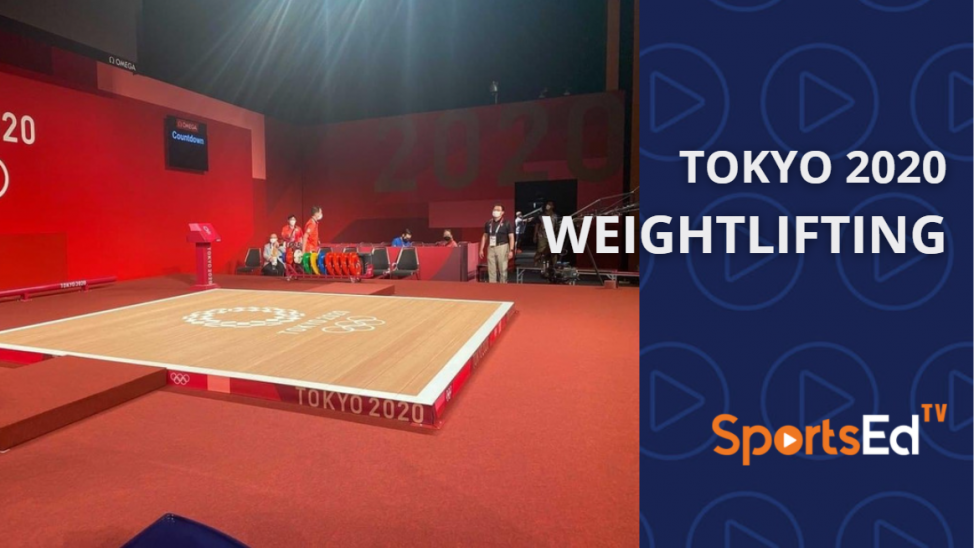